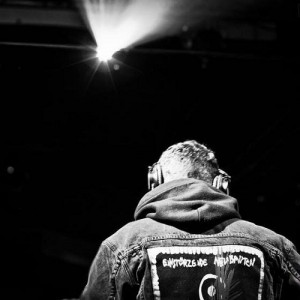 After Gaja’s recent release on Ophism, Terminal 313 invited the Berlin-based producer to some questions. What came out is an interesting peek into the mind of the talented Italian.

Q: You debuted in 2013 on Repitch, with a fiery EP, which was in line with the label’s sound. But still, why did you choose Repitch (or did they choose you)?
Gaja: Mr Chimenti introduced me to Pasquale [Ascione] and Davide [Carbone]. We became quickly really close friends and one day, when Davide and Pasquale where at my place, I told to them ‘try to listen this shit that I recorded’. I still remember, without any hesitation they said ‘we will release this immediately’. I never sent demos around, I was not believing in my music… but they did!

Q: After Repitch, the next release came already on your own Ophism. Does it mean you prefer to walk on your own and not to travel various labels?
Gaja: Yes, in general I definitely prefer to walk on my own, because I want to be free to release what I want and when I want. I want to have full control of the aesthetic and of the message of my work. If a label that I appreciate asks me for some tracks, of course I will think about it, but I have to be 100% sure that the vision of the label manager is similar to mine and that it remains like this. I’m not interested in commercial labels where the commitment is focused on marketing and where the creative part takes a back seat. Lately there are too many businessmen acting as artists. Personally, if my goal was to become rich, surely I would have chosen a different job. I’ m sorry, social climbing is not my cup of tea.

Q: Ophism 002 is pretty different from the label’s first release, recalling Interr-ference and 90s Dutch school of acid electro. Why did you choose this sound?
Gaja: I like to do different stuff and I’m a big fan of Guy Tavares’s labels. I have a lot of Bunker, Panzerkreuz and Atlantik Wall records. I love this punk attitude and the message behind it. I tried to re-elaborate that sound in my own way, which means raw live recorded jams in one take, nothing superfluous, no tricks, no waste. Maybe it can be a bit abstract, but for me it is a political anti-capitalist/anti-consumerism message and it’s present in all my works. Guy Debord docet.

Q: Based on what we have heard so far, seems that 90s techno and electro are inspiring you?
Gaja: Yes, that’s my school as I mentioned before when speaking about techno or electro. I’ m strongly inspired by the raw material like the early Jeff Mills stuff, some Bunker and Panzerkreuz releases and early Downwards stuff – just to mention the most known. I also believe that in the early nineties techno was more authentic and pure. No bullshit, a drum machine, a synth, a sampler, a mixer, some shit delay/reverb and a tape recorder that’s all, with this few machines they did all the masterpieces as I know. Creativity and rhythm, these were, and to me still are, the only components that we need to make people dance.

Q: Could you explain why your label is called Ophism?
Gaja: It comes from Greek ὄφις (‘ophis’) that means snake. It’s a gnostic ancient religion that venerate the Serpent corrupter of Adam and Eve, believed giver to men the knowledge of Good and Evil… Well I liked the fact to worship the enemy, the one who has thrown us into this sea of shit…

Q: Anything you would like to disclose about future plans?
Gaja: Ophism 03 is on its way and the mastering is expected on March 8. It will be either four techno power tracks with some acid or three techno and one ambient – I still have to decide. Like always, 300 copies.
There are other things in the pipeline too: A track for Repitch, a collaboration with D.Carbone for a new project and kind of an EBM EP on Violet Poison’s Veleno Viola imprint later this year. I’m also devising a sublabel for Ophism, focusing mainly on tapes where I would like to release some noise stuff that I recorded in the past and some crazy stuff from unknown guys.

Thank you and good luck with your future endeavours!