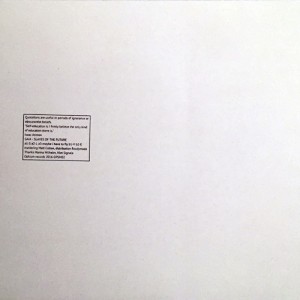 Inviting to board a ship to the future, Captain Gaja steers a vessel that has collected its cargo from the bygone times. In the second release for his own label called Ophism, Italian-born Berliner Alessandro Gaia remains inspired by the sound of nineties, but has dumped monotone loop-driven techno in favour of sulphuric rowdy electro.

Gaja, who still could be defined as a rookie producer, debuted in 2013 with in-your-face EP “Patterns” (Repitch), and soon thereafter launched Ophism with “Modern Passivity”, which sounded like a watered down version of the Repitch twelve. OPHISM 002 marks a major improvement when Gaja slams the floor with a sparkling cocktail of old school acid and electro tropes.

“Slaves Of The Future” offers a demanding ride on broken beats and biting acid lines. The opener “S” is introduced with nasty synth horns and overwhelming bass while “L” is thinner and minimalist in its setup. My A-side’s favourite comes with heavily vocoded “Maybe I Have To Fly”, which is a creepy tale under the leaden skies. The B-side cuts “V” and “E” are brisk 140 BPM assaults of Acid Planet-style sewer techno, the wrecking ball swinging above the ruins of wellness. A brave and intense release.