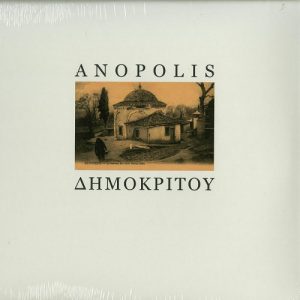 A heart-warming electronic music cluster has emerged in Greece around Thessaloniki’s Anopolis collective and Lower Parts, a label from Athens that has secured a quality roster with international artists such as DJ Stingray 313 or TX Connect, as well as late German acid king Andreas Gehm completed an EP during his prolific and unfortunately too brief career.

However, the label’s first wave of releases came from the locals, most notably from Anopolis fellows who impressed with the debut in 2014. Now the group consisting of Dim DJ, Drum Machinee, Lowjac and Oldman Talkin’ has completed another sessions of drum programming and presents a new nicely designed and composed EP, titled “Δημοκρίτου” (“Dimokritou”).

The daylight arrives with “Anopolis 15”, Chicago-inspired house recently heard on labels like Mathematics, a positive tune driven by deep drums, agile hi-hats and warm chords. Thereafter, the curtain goes up for the acid house blast titled “Anopolis 16”, a party starter straight from the jackmaster’s workshop that subsequently is passed on to Hieroglyphic Being. Chicago madman seizes the opportunity to mould a stretched version of “Anopolis 16” where house riffs are combined with treading percussion and noisy free jazz elements before meditative ambient acid “Anopolis 13” is calling the space with a vocoder voice to close the current chapter.

It’s worth to mention that Anopolis members are spreading their wings when Dim DJ has joined the ranks of Tar Hallow with a new EP and Drum Machine(e) will make the solo debut on the Athens label soon.