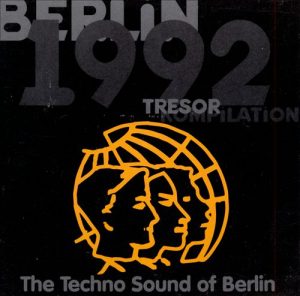 Fragrances, jeans, alcohol, a selection of hit CDs and suddenly, “The Techno Sound Of Berlin (Berlin 1992 – Tresor Kompilation)” – it was my first, unexpected meeting with release. It happened in 1992 at Amerest, an upmarket store in the university city of Tartu that opened in the dawn of market economy in Estonia some years earlier. It used to accept foreign currency only, until June 1992 when free-falling rouble was swapped to the Estonia’s national currency kroon. Still former ‘valuta shops’ remained either places to expose own wealth or, for the people not so well off, to do some window shopping.

I did the latter because for a student with modest net worth, “The Techno Sound Of Berlin” would have been a murder in the wallet, even for an equivalent of 30 German marks. So I admired the tracklist and fell to daydreaming. In the year 1991 I had started to realise that something exciting is going to happen with ‘techno’, when new sounds arrived via radio stations and started to fill cassettes in hometaping sessions.

Indeed, something was happening, not only in the smiley-crazy UK and US warehouses. Tresor Club opened in Berlin in March 1991, in a shack at Potsdamer Platz over the vault of the former Wertheim department store. The same year, Tresor Records was set up with the debut release by X-101, consisting of Detroit’s triumvirate of Mike Banks, Robert Hood and Jeff Mills.

Berlin had been reunited and techno institution Tresor had been born in the city’s Eastern part, to pursue a mission to bring down walls that were dividing cultures, musical tastes, nightlife preferences, etc., with hedonistic and forward-thinking mindset.

“The Techno Sound Of Berlin” came out on Mute Records’ offshoot NovaMute and was dedicated to Tresor as Berlin’s first techno club. However, the sound derived mainly from the renowned trance label MFS Records, the tracks produced by Futurhythm, Cosmic Baby, Microglobe, Voov, etc. The selection described well the sound rising from Berlin, including anthemic “Der Klang der Familie” as well as ‘Strategic Mix’ from Maurizio’s first EP “Ploy”.

Vein Melter was a project of Cosmic Baby, a famed trance producer and a figurehead of Berlin’s MFS roster, and Jonzon, a long-time resident DJ at Tresor.

For me, it took about a quarter of the century from the day I was holding this compilation, until I now finally got a copy from Discogs. Symbolically it happened in the year when Tresor celebrates its 25th jubilee and will hold a four-day anniversary festival from 21 to 24 July with a stellar setup featuring Dan Bell, Robert Hood, Juan Atkins, Moritz von Oswald, Regis, Surgeon, Arpanet, DJ Stingray 313, DJ Hell, Objekt – to name just a few. A good preparation for the event would be a most recommended book by Felix Denk and Sven von Thülen, to look back to Tresor’s impressive journey.

For Futurhythm, Christian Graupner aka Voov joined the duo who behind Vein Melter, to produce raw acidic track “Phuture 2”.