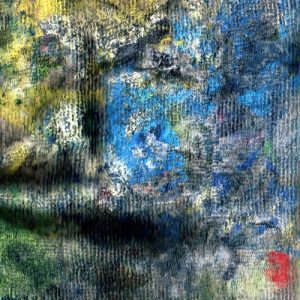 With echoing creak, the door opens to the world of abandonment, spider webs covering a metronome that sets the pace towards the midnight. Diabolical noises are gradually growing to hardly digestible sonic oppression where the crudity has its certain charm.

Fifteen minutes of the A-side’s “Exav 2B” are a tour de force of beatless dark ambient with suffocating drone passages, haunting overdrive effects and hollow whispers that make the mood-o-meter scraping the extremes. On the flip, “Dying Alone” is a wall of doom spanning over brain-challenging ten minutes with an abrupt end.

Bremen’s ZCKR has become one of my permanent objects of interest and the new EP by the label founder Sebastian Reuschel – actually the first release under his own name – is filled with depression in a creative manner. Reuschel wrote the first piece in 2013 for an exhibition in Delhi and as this composition in the border area of anything normal did not get any worse over the years, Reuschel wanted to release it. The second one is written for an uncommon teaser of Arthur Miller’s “The Crucible” (“Hexenjagd”) performed in the Theather Bremen and sound samples from the play’s rehearsals add a manic touch to the track.

According to Reuschel, the EP with his own sleeve artwork is a document of a temporary state of mind that lies already well behind. Despite of extremely depressive title, “The World Is Shit” encourages to expect a better tomorrow, to look for the moments when the sun comes up again.