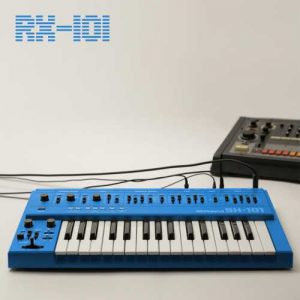 At the end of 1990s, Suction Records garnered much support for its synth and wave magic from Lowfish, Skanfrom, Mitgang Audio and others. Although in the last decade, the label from Toronto has been less in the limelight, it recently brought out a few notable records from the EBM and industrial angle, including new material by Celldöd from Sweden and a set of remixes of “Work Terminal”, a vintage track of Toronto’s legendary group Digital Poodle.

Suction’s newest discovery Erik Jong is from the Netherlands – a survivor of warehouse techno era who has opened his bedroom producer’s archives under the RX-101 moniker. Although there are signs of milking the nineties retro feeling, one should not be suspicious about Suction’s signing because the “EP1” is a juicy piece of techno with IDM influences, from the artist who has admired from early days Detroit techno and Aphex Twin.

Vocal samples and growling acid lines place the opener “Tunnel” to the Network 23 neighbourhood and Jong’s favourite machine Roland SH-101 has the main role in crunchy “sys.rx.9.a06”. Things turn grim in the sweeping synth study “Dead End” while “Bloom Pt.1” is a Rephlex-like IDM interlude. “The Calmness Of Distortion” returns to floor-focused roughness and downtempo treat “If I Could Ever Get” invites to a dive after pearls of melancholy.

RX-101’s other six-tracker “EP2” feels more placid, being closer to Suction’s Millennium turn sounds (“August ’97”, “Morning Glory”) and sci-fi sweetness of artists like Bochum Welt but also Detroit’s influence can’t be ignored (“Gemini Launcher”). Both EPs are united in a CD version with a bonus track.