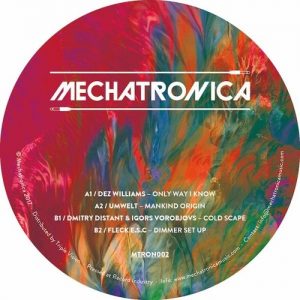 In the second vinyl release, the young Mechatronica imprint sticks to the sampler format, which enjoys wide popularity in electro nowadays, and summons four acts for another release that nicely taps into the label’s debut from the last year.

Extraordinary opener comes from Dez Williams, a Welshman from Holy Island, who has been behind a variety of tracks – from acid bangers to experimental electro. Now Williams is creating a total shake-up with “Only Way I Know”, which may feel difficult to digest at first instance but the love for the jolting track with steely vocoder is arriving quickly, pushed by a fusion of “Musique Non Stop”, EBM-ish synth riffs and hoover bites.

After eating it raw, we get back to safer formulas in Umwelt’s kind of uplifting “Mankind Origin”, where ascending synths over thudding syncopation are reminding of Passarani’s “The Golden Age” remix on Gadgets a while ago. In “Cold Scape”, Dmitry Distant and Igors Vorobjovs bring coolish air from Latvia with poker-faced Commodore swing and pensive pads aimed at breakdance battles. For the end, French artist Fleck E.S.C., who has been active on various netlabels in this decade, rolls out easy-going “Dimmer Set Up” with voice samples and classic electro stabs for pumping up the crowd.