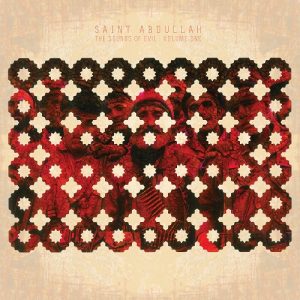 Saint Abdullah, a project by two US-Iranian brothers, was introduced to the world with the track “Mossadegh’s Revenge For 52” on Boomarm Nation’s spectacular “Family Album 2017”, a digital compilation from the experimental side of dub and world music. Prior to that, the duo had promised intense cross-cultural experience with some Soundcloud uploads and now Mohammad and Mehdi have completed their first album in digital and cassette format, accompanied by a seven-inch vinyl sampler on Boomarm, a label from Portland, Oregon.

History and religion are important sources of inspiration for Saint Abdullah who are based in Brooklyn and Tehran, and if the events and locations they are ‘singing’ about would be visualised, struggle and survival would prevail with heroic notes. Given the track titles and samples used, it’s an album with political connotations, but not in an extreme way of the pioneering Middle East inspired electronics artist Muslimgauze. “The Sounds Of Evil Volume 1” is predominantly about highly percussive sound when it confronts the audience with creative irritation.

While Saint Abdullah is literally tearing the listener out of the comfort zone with clashes between turbulent electronic programming and a wealth of more or less obscure samples, they also showcase the beauty of Middle Eastern music. The album is built on extensive use of human voice, whether performing song verses or being processed, chopped, distorted – already since the opener “The Battle For Karbala” that also samples TV footage.

For the seven-inch the choice is perfect “Madar Komakam Kon” (“Mother Help Me”), a savage rhythm track where the beats are substituted by distorted and sped up sound of men beating their chests, all mixed with beautiful chant. Its pendant “Sounds From The Hosseinieh” features a mass of male vocals that are gradually pitched down for a boot camp atmosphere.

The pensive side is represented by dramatic melancholy of “The Crown On Our Heads” and “Karevaneh Karbala” while “Martyrdub” carries on the tradition of classic Middle Eastern lady singers, being the other track on the seven-inch. Because of similar lazy rhythm and plenty of male voices, “Internal Affairs” is a good match to “Mossadegh’s Revenge For 52” and “Reza’s Final Battle” is an oppressive voodoo trip from the combat area. According to the artists, “this song is our way of telling the story of our uncle’s final battle, in search of Karbala”.

Before the 1979 revolution, Iran’s pop music was blooming if to think only about artists featured in the Finders Keepers “Pomegranates” compilation and I can only imagine how rich is Iran’s cultural heritage in musical expressions, from down-to-earth folk songs to religious chants. Bringing all these influences to a megapolis like New York creates a perfect Persian power folktronics experience.