25 YEARS AGO: The Temple rave in Helsinki 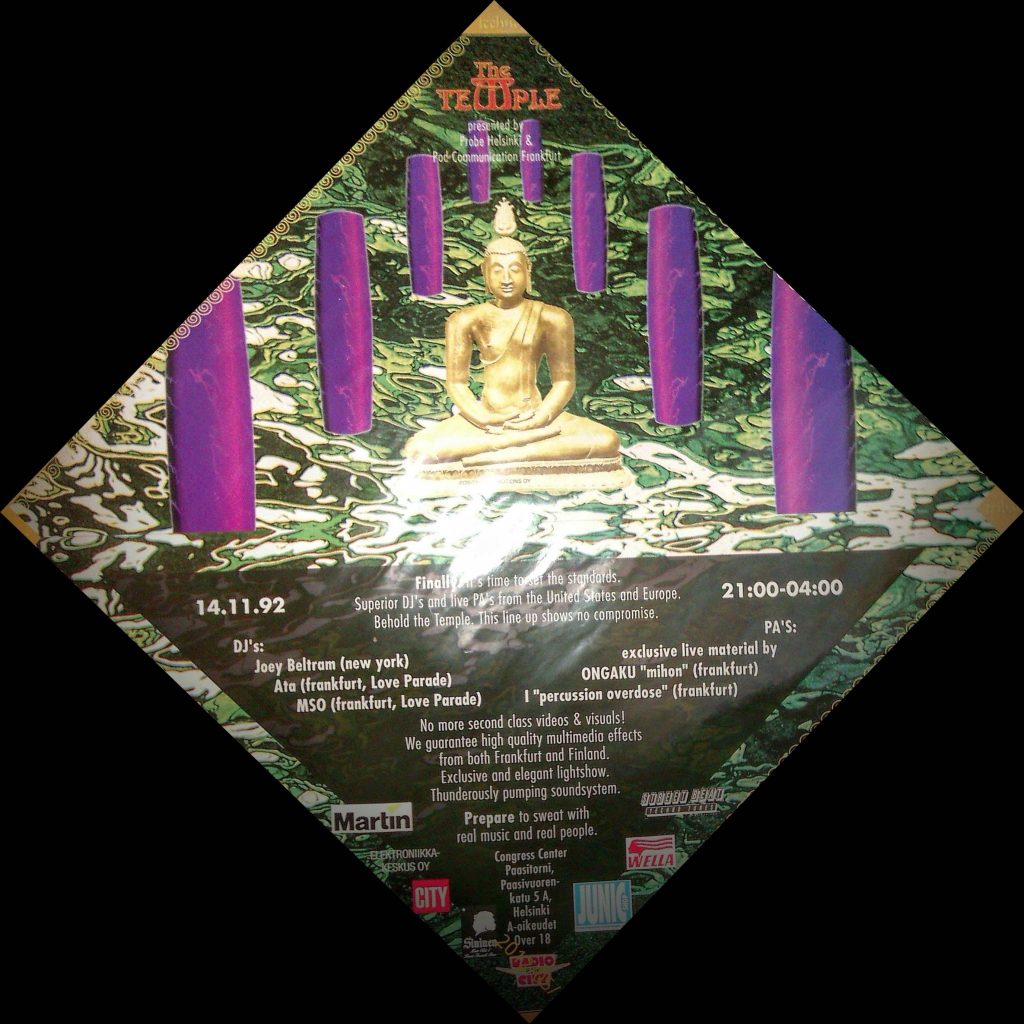 On November 14, 1992, The Temple rave was held in Helsinki. This is a personal view of the event I attended.

For me, all that happened because of Tapani Ripatti, a legendary radio host in Finland who ran Tri Patti’s Partyline on Radiomafia channel in 1992. In my memory, ever since the early eighties the man with perfect radio voice had been a beacon for dance music, much appreciated for his passion for new tracks from Europe and beyond. While is earlier program Ocsid was focused on italo and eurodance, his youthful mind went with the flow of new beat and later of techno and house. Although he played quite ‘mainstream’ stuff too (49ers, Leila K, Snap!, etc.), Ripatti covered German techno, British breakbeat and Benelux gabber on top of all that. Detroit techno was missing in his shows and those realms were explored later under the guidance of DJ Jokke whose DJ mixes were legendary showcase of the best electronic music in the nineties.

On November 7, 1992, Ripatti mentioned a party to be held in a week in Helsinki, featuring Ongaku, Beltram and a few others who didn’t ring any bell for me at that time. But his excited voice promised the sound of Frankfurt and New York and this must be the thing, I thought.

I had a week to organise my trip from Tallinn to Helsinki. Estonia had become independent in August 1991 and the Soviet Union had disappeared but travelling was not as easy as today. With the help of my friend Tarmo and a press officer at the Finnish Embassy in Tallinn, I got the visa and being equipped with a press card, I embarked on the journey.

It took about four hours to cross the sea between two capitals (today’s it’s about two hours), with M/S Georg Ots, that time the only passenger vessel operating between Tallinn and Helsinki. It was not my first time on board this ship because in the mid-eighties I had joined a ‘cruise’ that took us close to the border of Soviet territorial waters, but the ship wasn’t allowed any further. Before boarding, our passports were collected by border guards and of course, during the entire trip of a few hours, the tax-free shops remained closed. Even if they had been open, rubles wouldn’t have been accepted there.

But this trip was of a different kind. After arrival, I had only one slight problem to solve: To find out where the party is held. Only address I knew was Helsinki, Finland and the event’s name, The Temple. To my ‘surprise’, I didn’t see any oversize posters “Welcome to the Temple rave!” in the passenger terminal. So, I started to stroll, hoping to get some information, some flyers or little posters.

The success was not immediate. I went to Ylioppilastalo (Student’s House) where some parties had been held but it seemed dead quiet that night (at least in terms of techno). I tried to ask some young people, but they didn’t know. Suddenly, I saw a thematic poster, including the location Paasitorni, Paasivuorenkatu. Today its design would look like an invitation to a Goa trance gathering, but that time it promised an ultimate techno experience. I located the place on the city map and, stopped at the stairs of Helsinki Cathedral to eat greasy meat pastries that were my dinner that night and kill some time before the party. Wind gusts swept snow over my face, but I didn’t feel any cold because of excitement.

I arrived far too early and everything looked so quiet. The door was open and I noticed a two mates in the entrance hall. I asked the long-haired and bearded one if he’s a party organiser. “Nope, I’m a roadie”, he told, but in my eyes he was like the next level after The Temple CEO.

I presented my press card (of a publication that rarely wrote about music – it wasn’t “Horse and Hound”, though) and told that I want to make a story about the party. The guy tore a piece of paper and issued a ‘VIP card’, my name written with a marker.  It was an immensely friendly and unexpected gesture, in a lo-fi way, and now I had free entry to the party. Please, don’t get it wrong. I had money, Finnish marks, enough for getting a ticket and more. But it wasn’t the moment to reject the VIP status.

I got in and not everything had been set up yet, but PA battery, decorations and everything looked ultra-cool. This was my first party outside Estonia, and it felt like being in another dimension. Gradually things started to kick off when smoke machines were switched on and laser beams dashed under the high ceiling of the edifice that was built in 1908 to be Helsinki Workers’ House. Low-frequency noise crept out from speaker towers and the worship of bass drum had started.

Pod Communication’s boss Olaf Finkbeiner had set up a stall in Paasitorni, selling the label’s records for about 40-50 Finnish marks (about €7-8), but I didn’t buy anything because the label was new to me and there was no listening possibility.

The DJs were very concentrated, torturing immense PA system with unearthly sounds I hadn’t heard before. Beltram, wearing a baseball hat backwards, hardly noticed anything around him. Ata, in a skull-and-pill themed long sleeve of Aspiral brand, was working on the turntables for amazing sounds.

The crowd was friendly and excited, wearing mostly jeans, shirts, and t-shirts. Some people really had dressed to impress, from Altern 8-style outfits and masks to nuns and harlequins, and even to nicely dressed young ladies who later helped to coin the term ‘handbag house’. Everybody enjoyed the night as much as they could.

Whole madness went on up to the early hours and then information about after hours spread, which made many from the crowd move on to a location called Lepakko (The Bat). It was a squat-like legendary home of youth culture and mad parties, hugely popular in Helsinki scene. DJs Ata, Heiko M/S/O and Pascal F.E.O.S. from Frankfurt am Main plus local heroes Jokke, Mr Kirk, H2 and Ender delivered it to the crowd that had just witnessed a massive celebration of rave spirit at The Temple. Everything went on till about 7:30, when a procession of zombies left the place.

To round up the whole experience, before my departure I rang the doorbell of a university professor residing in Helsinki and he gave me a bunch of pulp science fiction from the 1950s I had to take to Tallinn as requested by a friend of mine. I was too tired to enjoy the literature and instead had a good sleep on board of M/S Georg Ots.