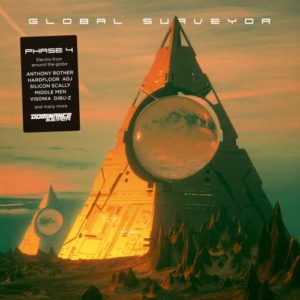 Dominance Electricity is far from being a fruit of the current electro boom, because the German label run by Matthias Weise kicked off almost 20 years ago and boasts a notable back catalogue with Blastromen, Imatran Voima, Kalson and other artists. The concept of the “Global Surveyor” dates back to the label’s beginnings and the fourth installment is a monumental effort again. Although four-five artist samplers are pretty common in today’s electro, you won’t see too many as heavy packages. Of course massive time capsules of Aleks Stark‘s Fundamental Records are in a league of their own and recently Scopex‘s tracks were repressed in quadruple vinyl, but still a 24-track compendium is an exception. Not only because of its volume, but of the quality as well.

There seems to be many new names, but actually several of them are Bandcamp operatives getting deserved ‘vinyl credibility’: N-Ter, co-founder of the Croatian Crobot Muzik, comes with bewitching arp parade “Agram Sunrise” and Amper Clap, who runs the excellent Urban Connections netlabel from Spain, enters the game with punching roller “Desolation”, remixed by Robyrt Hecht. Also from the self-released sector are the Russian project Low Orbit Satellite and Pi-xl, whose robust “Disciplinary Action” is one of the highlights.

Thus the compilation’s value does not only lie in a well-chosen sound exhibit, but it also helps to explore lesser known artists or even newcomers (Tekkazula, Energy Principle, Wilx, C*NT, Tyraell). The lineup of “Global Surveyor”, released in full across all formats, stands for its name because the artists come from about dozen countries, from Australia and Chile to Finland and Japan, not forgetting the host country Germany.