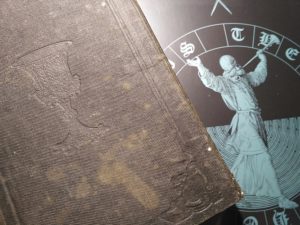 Masterpiece from an industrial knight

The special appeal of Ancient Methods lies in the combination of archaic and modern. In 2009, when I became aware of this industrial techno legend, the way how the medieval atmosphere was recreated with electronic tools stunned me immediately, and there was no looking back. The sonic storytelling of Ancient Methods is passing the centuries, meeting kings and thieves, fools and hangmen, hookers and hustlers, up to the iron workers and cloth weavers of the Industrial Revolution. The artist’s creations can be regarded as an expression of cultural and religious sediment, not only as a machine-made and human-guided industrial music. Possessing exceptional knowledge about the history of darker sounds, as heard in his storming DJ sets, in the same Ancient Methods admires classical music, and in a way, bygone times. But his grasp of sound engineering is forward-thinking, short of any unnecessary ballast.

The identity of Ancient Methods is also shaped by a strong visual symbol, adopted from a 19th century woodcut by Julius Schnorr von Carolsfeld. A motive of the said biblical illustration, of how Jericho’s walls were torn down and the city conquered, decorates also the sleeve of Ancient Methods’ debut album. Yes, over five years have passed since the seventh and what seemed the final release on the self-titled imprint and now with “The Jericho Records”, the artist from German capital jumps back to double zero, to the catalogue number AA-00.

For any artist, an album is a sign of achievement, but it’s difficult to say if the fans, like myself, did actually expect an album. Even when the label was in a way folded up in 2013, Ancient Methods remained busy both with remixes and own productions, launching last year another excellent label Persephonic Sirens. According to the liner notes, the album tracks have been written during the last five years, which means “The Jericho Records” has been under preparation since the release of the alleged final chapter.

A 14-track album is a challenge, especially after such an outstanding curriculum, but Ancient Methods masters the situation with knight’s determination and swiftness. Right after the monumental drone intro “Walls” – its Kafka-inspired lyrics may work as teaser for an experimental radio play –, the fortress gates are slammed open for a techno stampede.

“Twelve Stones To Divide Jordan’s Sand” is a brutal charge without losing the funk, while rubbery riffs and smudged human samples in “Treason Creeps In” are the ingredients of a groovy stomp for strobe-lit peak times. As strident are “Crack And Collapse In The Storm Of Lights”, very thematic sabre-rattling “Swordplay” and “Omen’s Duty”, which is revisiting the mysteries of Bulgarian voices.

Under the rising red sun, “The City Awakes” with Balearic notes and abundant drum arrangement. The most intriguing and memorable cut is “The House Of Rahab”, built on scorching creaks and grotesque ‘vocals’ from roosters on acid that are gradually climbing to falsetto. Certainly a highlight, even when it’s balancing between dumbness and ingenuity.

Regis co-works in “Array The Troops”, a full-fledged military exercise with a battalion of drums and classical strings open “The Seven Shofars”, a dramatic drone collab with Orphx, featuring ocean liner horns and roaring engines. “I Am Your New King” and “Moonset” come with lyrics and vocal part from King Dude and Cindytalk respectively. Another highlight ready for wrecking the floor is “Walking On Cursed Soil”, a ten-minute monster piloted by a smitten bass line and Prurient’s exclamations between whispers and screams, the latter in Bon Harris style, before all ends with “In Silence”.

For full disclosure: While I’m a person who struggles with the question ‘who’s your favourite artist?’, I could name Ancient Methods as one of my idols. And I can only say he has produced a perfect record, considering the story, the sound and the finishing – smoked clear triple vinyl in a beautifully designed gatefold sleeve.