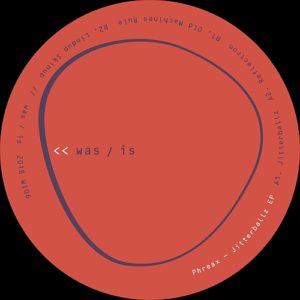 UK techno from the glorious 1990s

Former times are trendy in electronic music when vintage rave and hardcore riffs are returning to new productions, not to speak about fulfilling the dreams of sleepless fans who have anticipated neo-virgin wax from the back catalogues of Detroit stalwarts Drexciya, Model 500 and Aux 88, or fresh Downwards or Tresor pressings from the other side of Atlantic.

All mentioned operators belong to more or less established guild, but there are interesting finds beyond the underground luminaries and this takes us to Pittsburgh based label was / is.  The frontman Tony Fairchild is doing great A&R work because instead of satisfying the demand for famous highlights from the past, he prefers to present long-forgotten tracks. It means that while the parent label is / was explores ‘future-proof new sounds’, the offshoot drinks from vast reservoirs of the pre-2000 electronic music. Recently the EPs from Oral brothers (Cube 40, 4E) and Wild Geese have emerged in the retro section while the parent label’s most stellar moment has been “PGH Electro Volume 1”, from the beginning of 2018.

A new addition to the oldies section is Phreax and I have to admit it’s a totally new name to me, to someone who has followed electronic music closely since early 1990s. I rarely rely on promo sheets, but for giving context, the following lines from the well-researched and -drafted promo notes are very helpful: ‘Phreax was a project born out of the friendship of Ade Pressly and Guy Buss, two rockers-turned-ravers by the acid house and balearic explosion of late 80’s London. The pair started off as dancers, frequenting Spiral Tribe’s countryside raves, Colin Dale’s and Colin Faber’s Knowledge. Between 1995 and 1997 Phreax penned three 12″s of wonky, experimental techno for Charlie Hall’s M.C. Projects imprint’.

The first tones affirm the release belonging to the top level of mid-nineties UK techno. Quirky opener “Jitterballz” is a flaming track in the footsteps of early Schatrax, leaving sworn 4/4 fans somehow puzzled. “Reflectron” is touched by space funk, stomping and signalling in the radiation of the lights in a space vessel dashboard, while in “Old Machines Rule” broken rhythms and smoothened UK hardcore riffs are telling about the times that will never return. Dropping the BPM rate from about 140 to 120, “Lindup Skinup” is a beautiful intelligent techno piece recalling B12 Records’ futuristic allure.