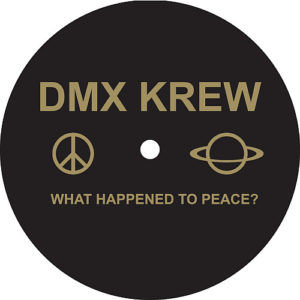 DMX Krew is well in the limelight with a forthcoming new album Hypercolour and a new EP titled “Sweatisfaction” on his own Breakin’ Records that was on hiatus since 2011. Actually the electro and synth pop master reanimated the label already at the end of 2018, asking in an activist manner questions about the state of peace. The vocal version of the ghetto minded bounce, landing between Los Hermanos Rodriguez’ “The Hague Is The Plague” and 3rd Face’s “Canto Della Liberta”*, is for trampoline jumping and features shouting youth, so loud and broad in their neo-agit-pop mission. For a stronger effect, automated beats are equipped with acid lines and, heard in the instrumental version too.

While intense vocals were the actual trigger for getting this record, the B-side turns out as a real earworm. “Planet DMX” sends envoys to the Earth, who are observing our lives through illuminators of a sonic spacecraft donated by Mad Mike. This is spaced out techno soul with rattlesnake percussion reproducing UR’s dark magic from the 1990s and a breeze of jazzy notes arriving at the middle point of the eight-minute track. A strong contender for the best Detroit track of our still very young year.

* Footnote: as pointed out by Ed DMX, “Canto Della Liberta” is based on this: https://www.discogs.com/Roberto-De-Simone-Tavares-La-Gatta-Cenerentola-II-Coro-Delle-Lavandaie-Heaven-Must-Be-Missing-An-Ang/release/1719311