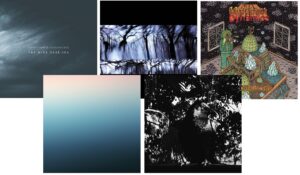 Not sure if there’s any empirical evidence that during the pandemic people’s preferences turned to ambient music. Might be, because of its mostly relaxing nature and I have to admit that a number of the genre’s new releases have sparked my interest, either as arrivals in my collection or finds from the promo folder. Here’s some thoughts about the releases that all are available on Bandcamp.

***** Christopher Bissonnette – The Wine Dark Sea (Dronarivm DR-66 – 2020)
At first listen it’s like November music, an ode to decay when Christopher Bissonnette’s compositions are bound to poorly lit areas, granite grey being the dominant colour. It takes time and concentration to perceive the finely tuned essence of “The Wine Dark Sea”, which is a genuine ambient album without any beats. Strung out drones are leading the game, but the sound palette is much more complex when orchestral textures are stapled with string effects and shy dubs. The album, out on Moscow’s Dronarivm label, offers a fine balance between relaxation and subdued tension.

Bissonnette is a Canadian musician and graphic designer working in Detroit. Since the mid-2000’s, he has released several albums on Kranky and other labels, having now landed on Taylor Deupree’s 12k for the next album.

**** Joachim Spieth – Tides (Affin Ltd AFFINLP001LTD – 2020)
Sometimes when looking up to the skies, I can imagine a threatening view of a huge spacecraft rising above the horizon, its huge hull covering the air above us. Kind of an alien invasion fantasy I wouldn’t rather want to see happening. “Cahaya Bulan”, the opener of Joachim Spieth’s album, expresses the same sensations, a gradual emergence of a non-human artefacts, gliding in the hiss of drones. And there’s not only one of them, a whole procession with “P 680”, “Solstice” and others. Only rattling rhythms of “Ultradian” are showing the side the label is known for. I can imagine that fans of Affin’s regular techno output might look surprised, but for the label founder ethereal compositions are not an uncharted territory, as they appeared on his first album on the label. Spieth’s ambient is of XL size, pretentious and powerful that you just can’t ignore.

**** Morgen Wurde – Für Immer (Off OCD045 – 2020)
A lonesome musician is sitting in the quayside mist, the trumpet sentimentally yearning for past days in “Glühte aus” and “Über Nacht”. This is the introduction of Morgen Wurde’s new double CD with strong classical notes when it features in addition to the trumpeter Tetsuroh Konishi violinist Georges-Emmanuel Schneider, vibraphonist Doug Perry and David Strother on electric violin. Obviously the artist has resisted the temptation of full DIY electronics and engaged many ‘real’ musicians. The result is convincing, as the mood is ranging from sentimental to dramatic, and even spiritual when enjoying ten minutes of pure charm of “Schien immer” with Maria Estrella Aggabao on vocals.

For the second part, even more people are invited to the board, for supplying remixes. There we find dub and deep techno driven versions (Altone, Roman Ridder), deformed Ibiza themes (Cie, Lostlojic) or broken beat exercises (Dmitriy Zakat), all clearly targeting dance floor at a suitable time between 10 pm and 6 am.

***** Multicast Dynamics – Ancient Circuits (Astral Industries AI 17 – 2020)
Have to admit that Astral Industries is a late discovery for me, thanks to the newest album of Finland based Dutchman Samuel van Dijk who has convinced under electro and dub techno aliases VC-118A and Mohlao respectively. His “Ancient Circuits” comes on two pieces of vinyl with four tracks in total – each of them 25 minutes, which means an extended listening experience. The album is quite a roller coaster, intense, even aggressive parts being in permanent exchange with relaxed ones. Some parts are gripped by noises and subtle rhythms of ancient natives, amorphous textures being chased by otherworldly effects and excerpts from a steam ship’s engine room, before the calmness arrives. Mostly beatless, it also uses broken beat motives that could fit the back catalogue of Hidden Hawaii and T++ (“Part Two”).

I can only admire Astral Industries’ artist roster and great intuition in matching sound and vision – yes, that album art – for head-turners in ambient fields. However, recent news from the label are not good: because of financial concerns, “Alterazione” from LF58 (Filippo Scorcucchi, Giuseppe Tillieci) seems to be the last vinyl for a while. Wishing a speedy recovery to the crew!

**** Night Sea – Still (Silent Season SSV 17 – 2020)
Nomen est omen for the new album on Silent Season, a haven of ambient therapy since many years. The excitement of a tranquil sea lies in its uneventful state, when it mirrors the setting sun or rising moon and hardly anything moves and changes. The same impressions come up with “Still” that explores the surroundings via slow-paced dub techno and ambient textures. It also offers a rhythmic angle with “Grand Bleu” and “Manila”, the latter being the most entrancing cut of the album. The magic of voluntary seclusion is written by Johan Ismael & David Grunzweig from Oakland, California and after a few years of work they have soundtracked a tantric relationship with the nature.