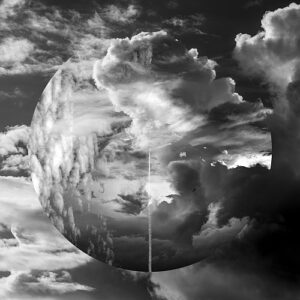 Appearances could be deceptive. A Bandcamp release with three long tracks of about 45 minutes in total and abstract photo artwork by Hannes Unt, “Polar Night Jet” looks like another journey in the fields of ambient. It’s confirmed by the first tones of the opener “Arcus Cloud”, when gleaming sound crystals are droning at sub-zero temperatures and illuminating the way to textures familiar to fans of the Estonian electronics guru Sven Grünberg. But the calmness is deceptive too, when a flock of distracted ravens abandon their positions to seek cover from fast-approaching whirlwind. Train-like percussion appears with didgeridoo and mouth harp effects, before returning to the placidity of the beginning.

The second tune “Polar Night Jet” arrives in a similarly pensive manner, when a melancholic guitar player is slowly passing an abandoned gas station at Madrugada Eterna. The scenery is distorted with hydraulic rhythms emerging from the ambush, turning the title track into a nasty churn. For a while abruptly barred by a commemorative wall of lost souls, dancing to oblivion resumes in the haze of Frankfurt’s late EBM and trance temple Dorian Gray. The first half of “Metamorphosis” is an experimental challenge with crawling drones, shredded rhythms and voice effects straight from a nightmare factory. The rest commences with a renegade view on symphonic orchestra, an array of instruments exposed to a dark ambient mindset, before the rule of avian wildlife is introduced.

Lauri-Dag Tüür is an Estonian composer and musician, remarkably a graduate in the field of electronic music and composition at the Estonian Academy of Music. He has played guitar in the Estonian groups Loom, Luarvik Luarvik and Melmachas, and performed live since 2010. He has written scores for several films and stage plays. “Polar Night Jet” is his first album and in a way it starts from ‘the beginning’, as the tracks were written about ten years ago. For sure a very promising start with a wealth of expressive sounds.