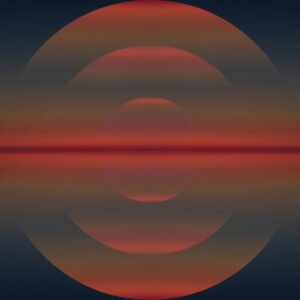 “Waves Of Silent Whispers” is Lauri-Dag Tüür’s second ambient and IDM album, after “Polar Night Jet” in 2020. The new one landed in my inbox already in June 2022. Though not forgotten, it spent most of the year underneath the ever-increasing pile of unfinished business. Instead of white nights in the summer, the release became a companion for the shortest days of the year. Nevertheless, compelling three tracks, in total clocking at over 43 minutes, by the academically trained musician from Estonia have the substance to age well.

Tüür’s sonic imagery can be called as ‘volatile ambient’ where the compositions express different moods and intensity and refraining from linear approach. In the title track “Waves Of Silent Whispers”, first there is a thin, long line as an expression of utter minimalism.  It could be the horizon where calm sea and blue sky come together. Then a moderate breeze emerges, assisted by droning sounds and solo by a lonesome guitar player. After sinking into refreshing waves, a flock of robotic seagulls piloting over the shores of beloved Hiiumaa herald stormier times, where bold bass and flashing synths are showing the way out from the meditative zone.

“Fading Into Bright Green” commences with a birdwatcher theme, with little chirping creatures hording the seaside. Then a complex arrangement of various instruments brings ahead semi-ambient track, suddenly joined by a rock band on tour. As expected, “Deep Dive” goes on underwater sightseeing with kaleidoscopic melodies amplified by organ sounds, for a holy and festive atmosphere. Darker textures arrive when an object arching over the seabed looks like Captain Nemo’s cathedral, being in fact a centuries-old shipwreck, to which a long guitar solo is playing hallelujah.