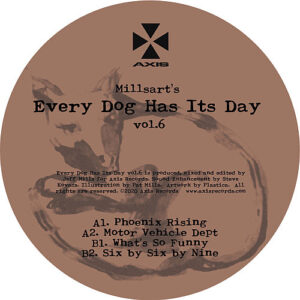 For Jeff Mills, 2020 is a theme year of “Every Dog Has Its Day”, which is turning into a spectacular series on his own Axis Records. Even when I think having heard anything from the purpose maker, the excitement can be compared to the very moment about 25 years ago when I carefully slit open the cellophane wrap of “Mecca EP”, the first Millsart release, shipped directly from Submerge. It was the start of a new, Axis chapter in exploring Mills’ works, after I had lost my mind about the timeless album “Waveform Transmission Vol. 1” on Tresor.

Now a similar sensation marks a proper return of the Millsart moniker, with three albums released on vinyl and five digitally in 2020. Such a wealth of music would be good for any artist’s multi-year effort and would pose to listener a challenge to consume such amount of material. Especially when Mills’ entire catalogue would easily fill the playlist of a return trip to the Moon.

There are stronger and weaker links in the series, but of this year’s releases the sixth installment is a clear winner so far.  While applying several trusted ingredients of Mills’ sound, the double pack puts the accent on techno soul by exploring the warmth in electronics. After velvety “Phoenix Rising”, warm chords continue in melancholic yet thriving “Motor Vehicle Dept” where would I expect Lisa Newberry’s lush voice kick in any minute, partly substituted by a public announcement recording.

Across many tracks cozy layers are mingling with jazzy keys (“What’s So Funny”, “Six by Six by Nine”), along with atmospheric swirls in “The Big Deal” and beatless subaquatic journey “The Possession”. On the D-side, “L’Addition S’il Vous Plait” is a deep house groover with French touch, while “World Wide Whoops” offers solid floor action. Intergalactic tones of “Axis Identification (Dove)” are wrapping up the album where Mills is not showing any artistic fatigue and makes to expect more compelling sounds in the series.