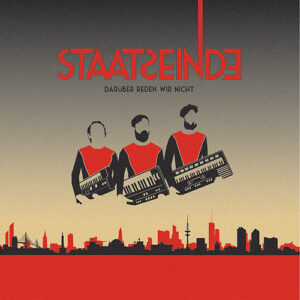 Dutch synth anarchists Staatseinde are appearing on the label Lo Phi Forms that this year launched with “Danger EP”, an aptly titled slab of acid frenzy from Klankman. With this promising notion, the three-man group has invited a choir of fairies to jointly introduce the release with Wagnerian intro “Staatsanthem” and then proceed to the EP’s autocratic superstar “Darüber reden wir nicht”, an uptempo blast with waltzer passages for EBM-rooted party heroes.

Commodore techno “No Return” features deliberately ugly vocals like from a Douglas McCarthy impersonator suffering of sore throat, while 808-backed vocals in distressed “Laat het gebeuren” are recalling I-F’s dystopian electro “The Men Who Won’t Come Back”. The B-side concludes with synth pop pieces “Grenztruppenführer” and “Vi Åker Dit”, respectively sung in German and Swedish under the umbrella of Neue Niederländische Welle, a style that Staatseinde has coined.

The group’s tracks are far from being perfect productions and deliberately leave an amateurish impression of an enthusiastic hobby orchestra from the countryside, which is part of the appeal. On top of that, Staatseinde’s EBM infused synth mania could be a good alternative if Rammstein is sounding too much as a rock band.