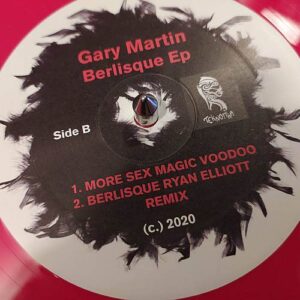 Gary Martin and Teknotika have never entirely disappeared from the picture, despite of irregular publishing schedule of the last decade. A period of absence followed to the 2015 single “Miriam / Beauty In Pain”, until the artist reappeared last year with a perfectly good EP and has now completed “Berlisque” with four tracks. It coincides with the “Reissue”, a two-in-one release where two classic Teknotika tracks are not only reissued but also reworked and decorated with appealing old-fashioned label design. By the way, I’m enjoying “2020 Interview With An Alien” a lot.

To me, as a long-time Teknotika fan, “Berlisque” sounds differently compared to the label’s early days, when the artist manoeuvres between vintage exotica and newer electronic sounds.  The title track believes too much in power of tinny percussion, when a Latin wedding orchestra is feeling lost in an improvised session. Snake charmer talents appear with swinging grooves of “Black Boa”, which is mixed with exalted crowd noise and alien radio signals. The B-side opener presides over the previous when distorted rhythms of “More Sex Magic Voodoo” are eating like hawks, with ever-present sleaziness capturing the spirit of blood magic. For the end, Ryan Elliot’s funk laden revamp of “Berlisque” is a nice surprise that would work in a warm-up set for Galaxy 2 Galaxy.