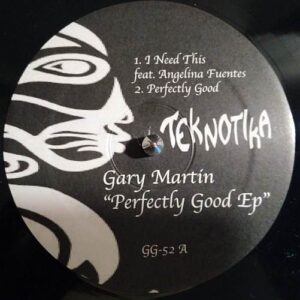 Exactly when Gary Martin’s absence became almost unbearable and the only relief (not financially) was to join the stampede for Teknotika’s back catalogue, the artist reports back with a telling four-tracker on his home label. Since mid-2010s “Post Techno Life” and “Miriam”, four years have passed and the wait for Martin’s new release was worth it. From the label’s beginnings, the artist also known as Gigi Galaxy has showed a perfect command of techno and house, with a touch of exotica, and it isn’t any different in present days.

Piano-fuelled “I Need This” sets the tone for house- flavoured A-side with a solid soulful performance by the vocalist Angelina Fuentes, who is well going in the footsteps of Simone Star. Of equal quality is the title cut “Perfectly Good”, which ignites rhythmic hip-shaking on the orders of lush deep house grooves.

The B-side opens with supreme percussion and calls of natives in “Shoulder, Shake & Pop”, while my favourite “Enchanting Voyage” affirms that for ages, Gary Martin has been mentally ready for a spaceflight. The cosmic funk is just irresistible, only the hypnotic groove at the track’s end could have lasted more than only thirty seconds. For the rest, all is perfectly good like in former times.