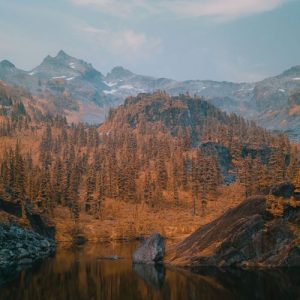 Hardly any daylight penetrates the depths of “A Warm Place”, which is furnished with low frequency roars of unknown species. So begins Tomas Jirku’s new album “A Philosophical Enquiry Into The Synesthetic  Experience Of Touching The Sublime”, as the full title reads on the sleeve. Released on Canada’s Silent Season, which has been traditionally a home for ambient and dub techno, the repertoire of the label from Vancouver Island is increasingly taking interesting turns, like with the new music by Tomas Jirku, a resident from neighbouring Vancouver.

Ten years have passed from his previous long format and recent times might have erased the artist from the active memory of electronic music followers, but the nuanced and immersive album is restoring Jirku’s position among forward thinking electronic composers. The album’s overall restrained and, of course, sublime atmosphere would predict a living room experience, but the artist goes further than that. Seeking the depths of electronic expressions, Jirku is not entirely detached from his past works of minimal techno, in the genre’s best sense.

After subtle rhythms of “Idiis Mortii” are supervised by a choir of shy angels and guitar passages (by Trevor Juras), it’s time for a twelve-minute voyage “The Iliad & The Odyssey”, moving from gentle calls of sirens to the drama of stormy seas. Exploring the foundations of our planet, “Tectonic Monument” is driven by tight drum loops and hazy layers for a sound that takes a step closer to the floor. With slight surface noise and grim drones, “Entropy8” belongs to the experimental side, as well as “Pele & Surtr” and “Hypoxia”, which is an electronic shoegaze session with the voice of Concettina Laalo. “Eyeless Through Space” rises above the vast forests of Western Canada for making an interplanetary connection.

For the best listening experience, it’s recommended to take your time, close your eyes and not to let yourself distracted.  In addition, because of the visual appearance, “Touching The Sublime” deserves a prominent display in the shelf, as it also features Jirku’s another skills – a photo book by him was released separately by the label.