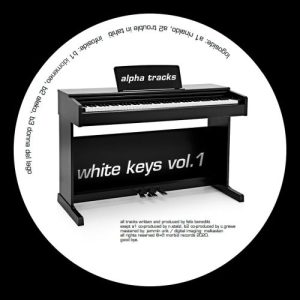 Although partying and club going was very limited in 2020, there were several tracks that would have worked on the floor or were just neat tunes for humming along. Distinctive in hindsight, to be remembered in a blind test in a few years time and ‘catchy’ in a good sense. Not claiming to be comprehensive, but here is a selection ordered alphabetically by artists, coincidentally my 2020 favorite taking the first spot

Alpha Tracks – Trouble In Tahiti (Morbid)
A promo I missed to notice and after the first listen bought both digital and vinyl version. Unlike the label name says, the two volumes of Alpha Tracks EPs are far from being morbid when offering an positive energy boost with diverse tracks between neo-trance and ambient. “Trouble In Tahiti” has been on repeat and will be in 2021 too.

Animistic Beliefs – Ojo De Las Grayas (Brokntoys)
Both atmospheric and acidic opening of the darkish EP “Thief Of Sanity” and I would loved to cover in the blog the duo’s impressive debut on Brokntoys.

cOmAtone – cRy to pieCes (Analog Space Trax)
“Comatone 95” was a hypnotic and dreamy classic written by Freddy Fresh and in 2020 the Midwest artist returned to the theme with a bittersweet tune.

D.White & DimaD – 600 km (Italo Mix)
Sweet and simple neo-italo from Russia and undisputed winner of my guilty pleasure category. A vinyl edition of 100 copies was released already in 2019, followed up by a number of digital remixes and edits. Just a reminder that the first record I ever bought was an album by Modern Talking.

Deena Abdelwahed – Wein Al Malayeen (Ma3azef)
After a devastating blast in Beirut, Tunis-based online music mag Ma3azef initiated the fundraising compilation “Nisf Madeena” that summoned many artists from Arabian countries and elsewhere. Impressive beats in the cultural crossroads and I just can’t get enough of Abdelwahed’s powerful track that also got an Ancient Methods treatment.

DJ HasH – La DMX En El Juego Esta (Urban Connections)
By now the netlabel from Spain has released 16 compilations filled with local and international electro artists. DJ HasH was one of the discoveries of 2020, with ‘dreamy yet intense track with orgastic synth riff’.

Il Quadro di Troisi – Il giudizio (Raster)
Something I wouldn’t have expected neither from Raster nor Dozzy who teamed up with Eva Geist for a synth-pop and disco driven album. Sung in Italian and carried by warm electronics, this is a motivational tool not only for exhausted minds.

Nullptr – Phantom Cell (Central Processing Unit)
From the wealth of the label’s releases in 2020, the album from Nullptr aka Eddy Bovaflux was on frequent rotation. Both dreamy and immersive, a welcome addition to the collection along with Automatic Tasty’s EP.

Sansibar – Sissi (Avoidance)
Even if there’s hype over Sansibar, it’s well deserved because the artist from Helsinki is capable to impress in various styles of electronic music. The EP “Game Over” was a sensation and the B1 track “Sissi” relieves 1990’s homesickness with tunneling techno beat and flowery synth stabs.

Sunken Foal – Yazd Pashmak (Countersunk)
Duncan Murphy from Dublin was very busy in 2020, releasing under various aliases many digital EPs and albums ranging from ambient and electronica to 808 experiments. Beautiful “Yazd Pashmak” has kept me haunting since the first time I heard it.

Yenny Skev – Oxide (KRS SLCT)
On a new Swedish label, ruthless techno banger that is made special by a thrilling crowd noise.

BONUS TRACK: Ylioppilaskunnan Laulajat – Pohjois-Karjala (YL Male Voice Choir)
Amazing interpretation both in sound and sight Gösta Sundqvist would have been proud of. For those who know.