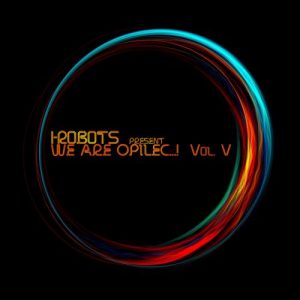 My first contact with I-Robots was a compilation with 1980’s italo smashes like “Spacer Woman”, “Penguin’s Invasion” and others, which well substituted  a painstakingly expensive mission of acquiring the originals on wax. Behind I-Robots and Opilec Music is the Italian Gianluca Pandullo whose mission is to unite sounds from different corners of the music spectrum.

The fifth “We Are Opilec” compilation reminds me of double CDs that were advertised many years ago on VIVA and MTV with keywords ‘techno rave’ or ‘underground explosion’ for a mixed bag of whatever sounded electronic. While techno hardliners don’t find anything to write home about here, the selection of diverse sounds makes this compilation an enjoyable one. It caught my attention with leather-boot italo stomper (“Starlight Dancer”) by Louisiana based Scary Black, which has great potential for dark club corners. I-Robots himself stands out with soulful “Respect”, featuring divine garage house voice of Kathy Brown, and the track “Frau” in Machinegewehr’s interpretation is for check-in at Bordello A Parigi. For acid house dial Jordan Fields (“Adjusted”), Goa euphoria is being spread by Lello B (“Shining Ray”) and Mark Evemport (“Ery”) is getting close to early Sleeparchive. Plenty of deviant disco fare from G-Tony, 8tronic, Popscile and the sweetest song comes from Luca Vera (“The Answer”). And there’s a rework of “Vamos A La Playa” …

It’s utterly nostalgic and partly simplistic compilation with pop angle, but nevertheless with very positive vibes. Next up on the label is a cross-genre soundtrack for “Disco Ruin”, a movie that looks back to over 40 year of Italian nightlife, people, culture fashion and architecture.