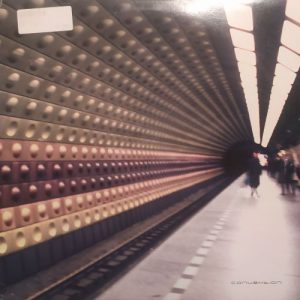 In November 2006, Convextion’s debut album left the pressing plant. There was much anticipation in the air, as already in 1995, the artist’s first EP on Sean Deason’s freshly founded Matrix Records had become a landmark of dub driven minimal techno. Before the album release, the price of the MATRIX1 had climbed to crazy 150 euros on Ebay, meaning that the initial value of the debut EP had been multiplied by thirty. Panicking about the availability, I managed to grab two copies of the album, from Hard Wax and Frankfurt’s Freebase, and it’s not something to regret.

Gerard Hanson from Dallas, TX was not a newcomer to Down Low Music, because the US label had already issued his two EPs, one under the E.R.P. alias. The LP’s life-affirming and enigmatic compositions are asking for an attentive listener to perceive all the nuances. The album has been aging extremely well and remains one of sacred items in electronic music.

Heartbeats and floral chords of the opener “Equanimity” are followed by my favorite “Solum Ferrum, which is flooded with torrential dubs to die for.  “Astrum” and 10-minute “Sulphur Vent” are sharing the genome with Model 500 tracks – not surprisingly Convextion has remixed “Starlight” – though exploring the stratosphere in his own way. Briskly rolling “Premiata” is hypnotic, string backed techno, well connected to signature dubbyness of “Frozen Surface”. The concluding piece, crystalline “JMA020603” moves in near ambient mode.

There are good reasons to believe that “Convextion LP” was the biggest success of Down Low Music that pulled several represses of the initially limited album. Soon after that, the label gradually vanished from the landscape, unlike Hanson who keeps both aliases running, for solo works and remixes. His two latest E.R.P. albums are now available at Bandcamp site of Forgotten Future Records.