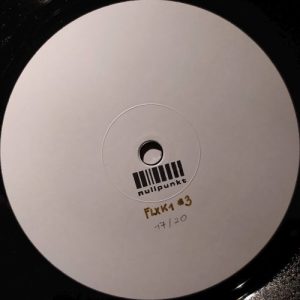 Monochrome rhythms from the labyrinths of Berlin in the two new outings on Nullpunkt. A seven-tracker by the duo Rvshes unlocks the No Future Techno series, while the EP titled “FLXK1#3” comes from the captain’s deck with familiar armada of halftime cuts. Both were announced already in late 2021 with upfront white labels for Hard Wax, which is a regular stunt by the label of Felix K.

The label head’s release opens with “Who Are You?”, interrogating a stranger over bass pulses and shy dubs. The procedure resumes with repetitive mechanics of “Why Are You In This Prison?”, which would work as homicide squad theme in the next season of “Babylon Berlin”. The “Akkumulator” is fully charged with pneumatic tribal, a tool for relentless crowds after midnight, while the Levl’s stripped remix is built on chopping rhythms. For the end, in “Language” drum’n’bass guru Commix joins Felix K for a mission of thesaural magnitude.