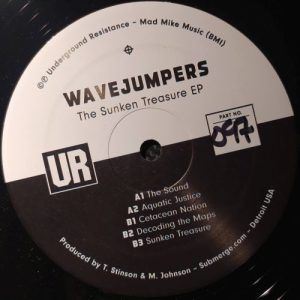 For Detroit techno headquarters at East Grand Boulevard, this spring was unlike many others in recent times. After a prolonged ‘under construction’ phase, the periscope finally went up at Submerge when the webshop reopened with a selection of vinyl and merchandise. Signs of life came also from Underground Resistance that for a few years had been busier with reissues than with new material. Now there’s a change on this front too with three new EPs out on the pioneering label.

When an act called Wavejumpers enters the world stage, it may feel that Drexciya 2.0 has been launched. Especially when Tyree Stinson, a brother of James, is one of the duo’s members along with M.Johnson. Family links and ‘brand influences’ are making pretty clear where the inspiration lies, making it a legacy project to amalgamate traditional UR electro and bass.

Nevertheless, Wavejumpers are well qualified in nautical sound mechanics, when armor-plated “The Sound” is rolled out, a true masterpiece of Detroit electro landing between “Afrogermanic” and “Electronic Warfare”. A funky riff leads the guardians of the seas to conduct “Aquatic Justice” with abyssal voice modulations and the B-side opener “Cetacean Nation” continues grandiose bass explorations. For a while we are leaving oceanic depths, to meet sunlight in relatively ethereal “Decoding The Maps”, before a jellyfish army takes us to the final destination, “Sunken Treasure”.

Two other UR releases this spring are from the soulful side of Detroit techno: With his striking rhymes, Mike Ellison examines dancefloor politics in “Covalence EP”, including an acapella version, and smooth Aztec chords appear on Mano De Fuego’s self-titled debut EP.