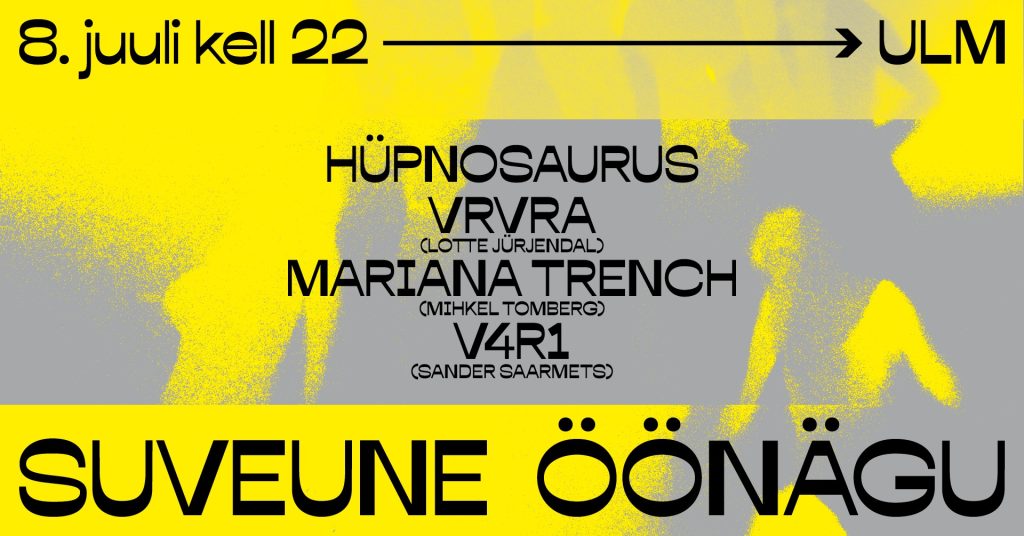 Though it can’t be said about recent weather, summer heat is peaking in Tallinn’s electronic nightlife, when the party listings of the Estonian capital are bursting in the weekends, despite of competition from numerous bigger and smaller events outside the urban sphere. In addition to the techno mainstay HALL at the seaside, another venue has opened in the northern part of Tallinn. ULM (Uue Loomingu Maja), which loosely translates ‘sci-fi’, is located in the Manufaktuuri Quarter, a former site of weaving industry that is facing gentrification due to upcoming large-scale property development, including Tallinn’s tallest high-rise. As of today, the quarter offers genuine industrial setting, a mix of century-old red-brick buildings and dull Soviet-time premises. In one of the latter operates ULM, a pop-up concept in a building with about 15 meter-high ceilings.

On a rainy Friday, Suveune öönägu (a word play on ‘summernight’s dream’) attracted to the ULM dozens of electronic fans to witness both DJ sets and live PAs from local players.

Mihkel Tomberg is a prolific artist who is busy at different fronts, including Eesti Elektroonilise Muusika Seltsi Ansambel that is dedicated to ‘electronic chamber music’ and live performances, for example with the Estonian electronica guru Sven Grünberg. Known for his passion for deep electronica, for this occasion Tomberg brought out the Mariana Trench alias for a very stimulating live set that opened with breezy techno with progressive touch. After proceeding with ample dubby chords, we reached the flow of perfect intelligent dance music that recalled Dutch-Detroit style the tunes feeling like by Steve Rachmad or Orlando Voorn. Kaleidoscope of sounds for the relentless went on with portions of funky heat, then making room for a gnarly acid for sweaty moments and subsequently moving on to ghetto drums.

After Tomberg’s diverse and thriving set, V4R1 by Sander Saarmets unlocked modular avalanche, with doomsday horns and sluggish woodblock percussion. Steely synth leads were colliding in the premises for confinement of the mind. Though different compared to the opening fare, V4R1’s own definition of analog dance music resulted in a forceful session.

Hüpnosaurus is a trail blazing project by Aivar Tõnso, whose Üle Heli organization was behind the event. The live launched with elastic drones and reached cruising altitude with Basic Channel’s “Enforcement” type textures. Leaving the Earth’s orbit behind, the sequences were challenging the vastness of infinity and eerie sound serpentines dashed through the space, creative noise layers being a precious cargo on this journey.

Lotte Jürjendal aka VRVRA joined forces with Toomas Savi’s Motobor project, for an eclectic-energetic jam. No time was wasted in a waiting room when Lotte’s shrill echoing vocals on euro house headed to a bumpy road of bass drum, before hoover stabs took the control and trance met hardcore – and several other elements of electronics in a twisted way.