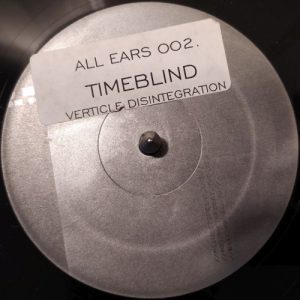 Woody McBride’s label empire Communique is reporting back with a number reissues. Having started with my long-time wantlist member “Lovers” by Modal, excellent house reductions from 1996 on Sounds. label, the spotlight turned to the label head’s classic “Basketball Heroes”. Also seeing the daylight are two releases by Timeblind, a project of Chris Sattinger who belonged in the 1990’s also to the rosters of New York’s techno imprint Synewave and UK’s Missile Records. Along with much-desired album “Ouija Board Through A Vocoder”, the four-tracker “Verticle Disintegration” will be reissued, originally released on Communique’s All Ears offshoot and until recently well available in the aftermarket for reasonable prices.

The EP’s speeding title track lets the dogs out with bouncing techno and rave whistles, while eternally looping and modulating vocal sample on sturdy beats lends to “Charred” a ‘losing control’-effect. Tidy percussion is prominently featured in “Wander The Earth Like Cane” that could summon Purpose Maker and Gigi Galaxy for a tribal-minded jam session, passing the baton to quirky synth stabs of floor-conscious “Interrupt”.