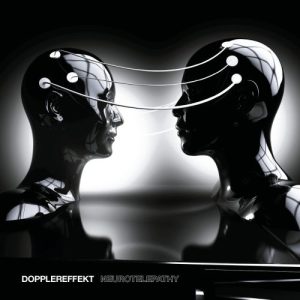 Dopplereffekt’s magic has been accompanying us from the mid-1990’s, when the extraordinary Dataphysix releases by Gerald Donald aka Rudolf Klorzeiger and Kim Karli appeared with sterile mechanics and a bit of sleaze (“Pornoactress”). Since then Dopplereffekt has remained Donald’s core project, in recent years in collaboration with his wife Michaela To-Nhan Barthel. In the same, Germany’s Leisure Systems has become the duo’s home label and “Neurotelepathy” is their first album in this decade. Shifting between ethereal, ambient-like pieces and near field of 4/4, the album doesn’t follow a linear concept and leaves an aftertaste of sketchiness, like an assembly from the ‘unreleased’ folder. Though the tracks have passed a strict quality control procedure, as it is supposed to be by a team of sound scientists.

On the second piece of vinyl, “Cerebral To Cerebral Interface” picks up the pace, followed by heady soundscapes of “Cerebral – AI Entanglement”. The D-side is one a healing mission when Dopplereffekt’s branded pulses reappear in gravity-resistant “Optogenetics” and penultimate “Transcranial Magnetic Stimulation” combines solid bass with melodic pads, before shockwaves are sent through “EEG” for dissolving into the infinity.