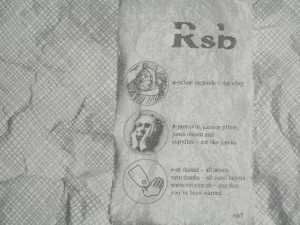 A procession is dragging their feet in a cobbled street, squeezed between dark and ancient town walls. Hooded beings feel the fatigue in their feet and what is eating them? Are they still in a shock about the execution of a despotic landlord or are they ridden with fear after having learned that the entourage of inquisitors is approaching? Or are they just the believing men in-trance who obediently follow the beat of a mad drummer?

On the A-side, Ancient Methods takes us back several centuries and uses medieval-like rhythm patterns that run through the filters of chugging techno. The result is hypnotic and deeply sinister titled “The Whip”. It’s launched with a minimalist but heavy-hitting industrial drum that gains more power, then changes the rhythm and gives you a slight break before finishing in more digestible tones. Meant to be played on 45 RPM but works well with 33 RPM – the right speed is somewhere in between.

During the first week I did listen three times to the record – it wasn’t too much and I just wanted more. Great techno that sounds fresh and is so medieval at the same time. Devastating unearthly tracks take you on awesome trip!