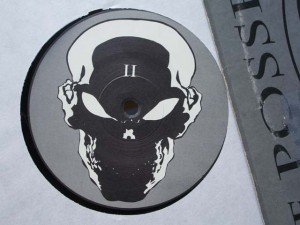 Skulls at large again. Planet Core Productions’ (PCP) hardcore machinery plays with breakbeats but manages to create even darker and gloomier atmosphere than in their usual kickdrum-infected rave monsters. The tracks do not suffer under self-imposed speed limit and relative slowness makes them even harder.

“Black Blood” is massive: starts with obscure rubbing sequence, followed by fierce breakbeats, symphonic strings and evil voice samples. “Manipulator” quotes a horror movie dubbed in German and then the mass of breakbeats and hoover sounds makes it another intensive trip.

On the flip “The Lord Is My Avenger” begins like a meeting of Middle Eastern strings and voices but gains speed thereafter and follows the setup of other tracks. A shattering interference by long-time defunct PCP camp, from 1992.