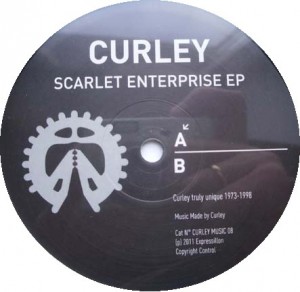 When the gang of Spiral Tribe ravers swept over the Europe about twenty years ago, Dutch-born youngster Curley Schoop aka Esoteric was one of their associates. His untimely death in 1998 abruptly stopped the career having started already in 1991 when Schoop was a member of a Djax Records signing called D.I.C.E.

To commemorate Schoop and familiarize younger generation with his output, French label Expressillon launched Curley Music for reissuing Schoop’s works. On the “Scarlet Enterprise”, released under the Esoteric guise, especially the A-side is a real gem with rudeboy breakbeats and blatant kick drum. Like a blend of early hardcore and The Drum Club’s tribal, it works as a crusty anthem to praise hedonistic lifestyle. The feeling of bonfires and hippie vehicles dominates also the B-side where medium-paced bass drum offensive stomps big time. Two long tracks of old school bliss.