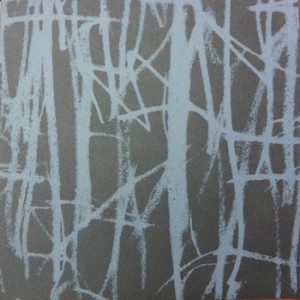 Ian Martin comes from Rotterdam and has previously recorded for labels like Bunker and Strange Life. It might create some expectations, but this is not the usual dark electro or synth disco from Holland. Being a visual artist, Martin has dropped a new album of sonic paintings for Seattle-based Further Records, for moon walking in the paths of experimental music.
So, open your third ear and intercept the opener “Moving Activity”, which is bubbling under the surface with electronic strings and scrubbing sequence. “Drups” features a lost drone in a grey jungle of plastic wires whereas “Voice Of Space” takes even a longer leap into the abstractions, in a dimmed and interfered transmission from the endless corners of the Galaxy.
With his two synthies Martin has embedded sounds of instruments that may sound surprising in this type of music: Distorted guitar riffs on a backdrop of biting synth work in “Stream” are a compliment to rock’n’roll days while grind organ and xylophone have found a home in “Wires”, along with alien signals in this multi-layered track. For the end, “Mechanical Rain” emits sounds of a shining steampunk device, in a minimalistic piece with somber carillon.
The album is not oriented to the dance-obsessed High Street, but to the poorly lit backyards of electronic music. Very different from the label’s previous album by Nuel, it displays the searching mind of an experimental musician.