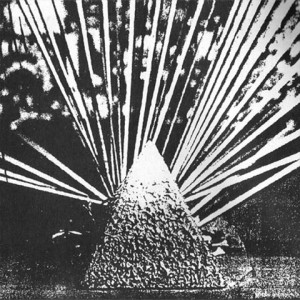 Jamal Moss’s starting point was in Chicago, where he, a South Side boy born in 1973, at a tender age of twelve witnessed the evolution laid out in Ron Hardy’s Music Box. Across industrial and new wave, without leaving unnoticed Larry Heard’s Gherkin Jerks project, he became an electronic artist with very distinguished sound.
Given his urge for experiments, Moss’s affiliation with Morphine Records is not surprising and the newest contribution is brought to us under the Hieroglyphic Being guise.
A-side’s “The Lost Transmission” is a challenging track, terminus for the club sound where the door is firmly shut for any harmonies while inside a throbbing mess of noise is ruling. Amid chaotic rumble machines are in pain, destined to demoralize the neighborhood with oppressing fifteen minutes of convulsing synth noises. Residuals of the Music Box or Skinny Puppy are combined with broken drum machines, all moving at a tantalizingly slow pace. Double the speed and you get closer to mid-90s Relief sound, like heard in Lester Fitzpatrick’s “Frantic Frenzy”.
On the flip we are catapulted to the year 2222, to a classy night spot where Unidentified Funking Objects have gathered under the sign of “Cosmic Bebop”. Again detached from the techno canons, we move from electric organ staccato to swaying string samples reminding of Kid ‘N’ Play via Altern 8, all wrapped in the foil of jacking percussion.
All that might sound complicated, but “The Lost Transmission EP” is another wild example of Hieroglyphic Being’s daguerreotyped electronics.
Buy vinyl

Hieroglyphic Being – The Lost Transmission EP