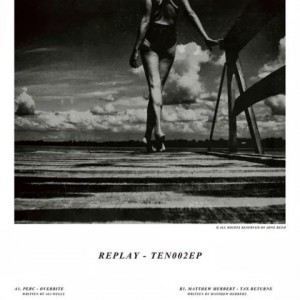 10 Label’s “Mu EP” was a memorable release because of intriguing lineup and a seagull portrait on the black-and-white cover. After a two-year hibernation the Japanese imprint has now summoned a group of international artists to the second mini compilation titled “Replay”, once again sporting a tasteful sleeve design.
The EP’s straightest and most throbbing cut is “Overbite”, an anesthesia-free treatment by the screeching machines guided by London trooper Perc and expectedly close to Perc Trax’s industrial can(n)ons. Of different kind is “Subject Of The Stenographic Figure”, a calm and crackling Gothic indietronica by the Blackest Ever Black artist Dalhous.
A surprising appearance by the big band man Matthew Herbert opens the flip side with a playful microhouse and glitch session “Tax Returns”. But the best is yet to come: Steven Porter, not a techno-obsessed Brit but a brainchild of Yuji Kondo and Katsunori Sawa, founders of the 10 Label, drops outstanding “Fundamental Belief”. Shuffling last track is an amalgamation of nebulous hard rhyming and industrialized caustic funk, all that sounding like a meet-up of Khan and Fun-Da-Mental.