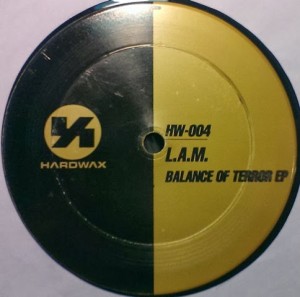 In 1992, the same year when Drexciya debuted with “Deep Sea Dweller” on Shockwave, they launched another alias on Hardwax, a label from Detroit techno’s rougher sonic area that had been set up by Robert Hood. Hardwax sound was much harsher than the one of M-Plant, Hood’s main platform across the years, and it’s reflected in “Balance Of Terror EP” with a slant of UR’s punisher mindset of that time.

L.A.M. was deciphered as Life After Mutation and the EP’s six tracks reflect the fury originating from corrupted genomes. Wiggly synths slap like barracuda tails in “Radius Of Infliction” reminding of “Aquatic Invasion” while the gloom of “Nuclear Facelift” is alleviated by the deep-sea pads in the finale.

After the A-side’s fluorescent outerlude “Meltdown”, pest control squad feels aural imbalance in quirky “Hostile Bacteria” and disaster coverage, spelled out as we are on TV, happens in “Toxic TV” with braindance meeting militant riffs. For the end, raw and angry electro techno is served in “Death Toll“, a direct transmission from a zombie ballroom.

In 1996 Hardwax made a repress of the EP, another one was added by Clone in 2003 with the bonus track „Irradiated“ and in 2016 a remastered version came out in the Clone Aqualung series. The Hardwax EP is another masterpiece by Detroit legends.