It was like a flash in the night: The existence of Pulsar Recordings spanned over two years only, 1994 and 1995, but with eight releases the label’s endeavors strongly influenced the Midwest acid scene in the mid-1990s. The man behind Pulsar, Mike Henk aka Mike E. Clark, came from Detroit, the city dominating the techno movement back then.
Instead on courting local or Midwest labels, those of Freddie Fresh or Woody McBride, Henk set up his own little shop to spread hazardous acid bacteria and Henk’s rough cuts quickly hit the nerve of the underground. However he made one guest appearance on Fresh’s Analog Records, with “Connect” for “Midwest Acid Harvest” compilation.

In 1994 Riley Reinhold aka Triple R from the German techno mag Frontpage interviewed Mike Henk about the label and his works. Here is a translation.

Mike Henk – the man from the mountains

We have not been used to such craziness from a Detroit label. From a place usually standing for roots and integrity, comes like from nowhere a new label praising acid. As fresh as on the day it was born, the 303 is thrown in like a concrete mixer to produce psychedelic cubes for our brain. Triple R spoke with Mike Henk, the owner of Pulsar Recordings.

FP: When did you start making music?
MH: I got my first piano when I was 12. I have experimented a lot with the music but in serious manner I have dealt with it for three years only.
FP: What did you inspire you to write first tracks?
MH: A bass drum
FP: What type of music did you listen in the past?
MH: 60s motown, R&B, rock, 70s disco, 80s new wave, punk, etc. Almost everything.
FP: Where do you live?
MH: I live in Royal Oak, Michigan, USA, two miles north from Detroit. The records are mastered at National Sound [Corporation] (Detroit) and pressed in Nashville, Tennessee, USA.
FP: Your 303 tracks are very untypical in American circumstances. Many US labels have abandoned offensive 303 sound. Why do keep this style?
MH: I’m addicted to 303 and it makes me horny.
FP: Your cuts remind slightly of D.jungle Fever records from Germany. The 303 is programmed as madly and it’s the central element of the tracks.
MH: I don’t know D.jungle in person but whenever I see their record I will buy it. But for some reason these are hard to get.
FP: Are you in contact with other labels from Detroit?
MH: No, not in the moment.
FP: Do you have a concept for your label?
MH: To break even.
FP: Is there a competition between the labels?
MH: No, only a difference in attitude.
FP: Have you previously released anything on other labels?
MH: Yes, but I don’t want to speak about that. I make all tracks myself and maybe in the future I will release something on other labels too.
FP: Do you DJ?
MH: Not yet but I would love to.
FP: Who is the one you would like to produce together?
MH: With Freddie Fresh and Laura Grabb.
FP: Your second release is definitely harder than the first one. Does it indicate a direction and how will be the next release?
MH: No, not necessarily. The next EP has four untitled cuts and will sound somewhat harder. The release date is 28 June 1994.
FP: Because there are only editions of 500 and you hardly earn anything with that, do you have another job?
MH: I work in a recording studio in Detroit. At home I work under the name Mike E. Clark as mixer and producer for hip hop and rap groups. 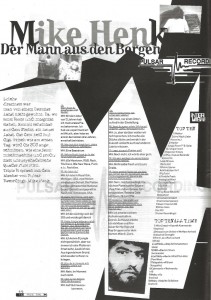