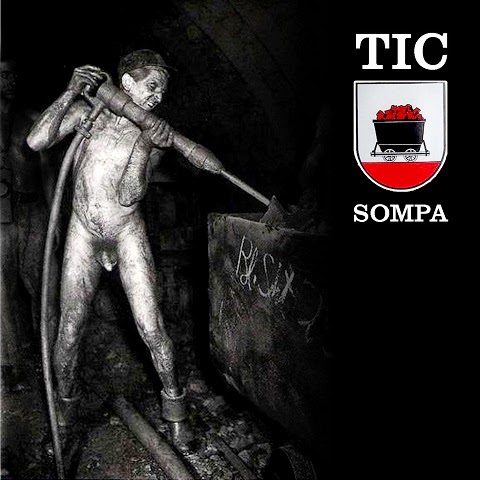 Oil shale is the Estonian gold, excavated in the underground mines in the Eastern part of the country – exactly how it is depicted on the CD cover. A band rooted in death metal, grindcore and punk, the three-member TIC was part of the region’s musical underground in the beginning of the 1990s. Those influences dominated in the group’s debut tape recovered now from the archives by Trash Can Dance label.
The album “Sompa”, dedicated to a desolate mining village of the same name, is filled with post-punk aggressions, like the title track “Sompa” and “Mädapea” (“Rotten Head”). Occasional wave and electronic notes emerge in “Fat” and upbeat DAF-esque riffs in “You Have A Right To Die”.
Of different breed are “T.A.K.E.”, “Melancholics Dream” and “Invisible Antlers”, which would have passed the test for The Cure’s warm-up session. But the most interesting finds are screaming kinkiness “Sex Magic” and industrial smash “Mehhaaniline Kristus” (“Mechanical Christ”).
One final note: Those interested in ancient naked mining techniques might be curious to learn that TIC was performing in 1993 Eurovision, taking Estonia to the 3rd place right after the nations like Sylvania and Perfidia.

For purchasing send e-mail to gtm242(at)hot.ee (Trash Can Dance)