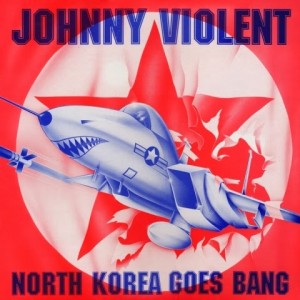 Actually, it was “Ultraviolence”, Lana Del Rey’s album that triggered current post. The American lady singer is obviously light-years away from doom metal and even hardcore techno, which had never been the case for Nottingham-based Earache Records, once a home label for Napalm Death.

Somewhat surprisingly Earache went hardcore in the 1990s when it signed Jonathan Casey. Performing as Johnny Violent and Ultraviolence, the UK-born artist landed in the gabber scene 20 years ago. Casey released albums like “Life Of Destructor”, “Psycho Drama” and many more, but the most thrilling track was “North Korea Goes Bang” under the J. Violent moniker. At the BPM rate exceeding 150 the ear membranes were damaged.

Casey, his father a theology professor, his mother an author and charity activist, got excited about punk and metal at the tender age of 11 and started experimenting with computer sounds. “I did not want go through a lengthy process of learning an instrument when computer allows to produce interesting noise rather quickly”, he said in an interview to Frontpage in 1996. After feeling the appeal of acid house, he proceeded to the music which is even more aggressive and intense, but also more emotional and funny than punk. “Two first words in my debut in 1991 were fuck you and this was quite unusual in love & peace & happiness scene of that time”, Casey has recalled.

Earache, a local label in Casey’s hometown Nottingham, agreed to listen the demo tape but Casey insisted he would play DAT. He took his portable DAT player to Earache’s office and signed with the label two days later.

““North Korea Goes Bang” does not mean I want war and this is more like a comment about the way how the war is presented on TV as entertainment. North Korea as a track theme is as cheap entertainment and this is the idea behind.” (Johnny Violent, interview to Frontpage (DE), 1996).