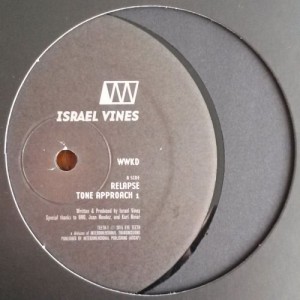 A new release by Israel Vines had been in my wishlist since hearing his superb remixes for Stave and Erika, when Vines’s skill to control the groove made appetite for more. Although I was a bit too early with the assumption that in 2014 we should have watched out for him, Vines has not disappeared anywhere and now has the honour to inaugurate Eye Teeth, a sub-label marking the artistic adulthood of Ann Arbor’s Interdimensional Transmissions.

In the title track WWKD”, the Midwest veteran and current Los Angeles based artist, releases the steam to make room to roiling bass line, percussive variations, inclusive some cracked old school beats, and obscured voices. A more serious call to the floor follows on the B-side, as “Relapse” turns to bustling European steelworks techno, throwing plenty of reverbs over a straight bass foundation. Often part of today’s techno releases, dark ambient drones are not missing either when “Tone Approach 1” wraps up the whole thing.

Well-produced but slightly less colourful than I expected, “WWKD” is still a good omen for the future, both for the label and the artist.