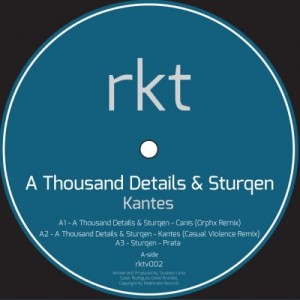 Reaktivate is a label from the harbour city Porto, Portugal, the majority of its output coming in digital format, for DJs fuelling the techno floor. Of recent outings, it is worth to mention Jönsson Tõll’s wonderfully titled “Mulla Ei Oo Aavistustakaan Mitä Tää Kaikki Paska Suomeksi Tarkoittaa”, a tribute to Finland containing both deeper and storming side of techno.

The label has not ignored the vinyl format either, the debut dropping in 2013 with peak-time material by Astronomical Telegram. Pretty different from the previous is RKTV002, featuring local expertise of A Thousand Details, a project of the label co-founder Gustavo Lima, and dusky electronics duo Sturqen, known for its output on Kvitnu, Metaphysik and elsewhere.

Levitating between dark ambient and industrial techno, “Kantes” comes in dark colours, especially considering the guest appearances. Both the remix of “Canis” by the Canadian duo Orphx and Casual Violence’s version of “Kantes” stand for hazardous spill of eerie synth sequences and crawling percussion, for an excellent start of the EP. Similar to the original “Kantes”, Sturqen’s own track “Prata” is almost a minimalist piece with thinner timbres while A Thousand Details sticks to aggressive throbbing in “Cleric Terror Corps”.