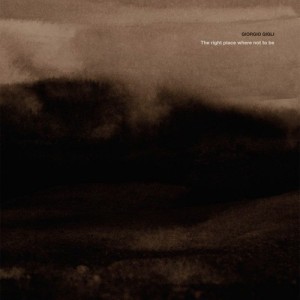 After two years of relative silence in the solo front, Giorgio Gigli has completed the debut album that can be seen as an attempt to challenge the stereotypes. In stark contrast with Gigli’s former droning and noisy floor tracks, the triple vinyl “The Right Place Where Not To Be” is focused on sounds closer to the ambient electronica. Something already heard in the 2010 track “Psychological Scene of the Imagination (Psychoacoustic Edit)”, his collab with Obtane on their own, by now discontinued Zooloft Records.

The release sounds quite exceptional also in Electric Deluxe’s catalogue, diverging from its ordinary banging material, especially when Gigli’s previous floor EP “Inside” on the same label did not predict what was coming. The new album is introspective, occasionally cinematic with dark undertones, reminding of the debut of Gigli’s fellow countryman Daniele Antezza as Inner8. The highlight and quintessence is “Il Futuro È Solo Un Ricordo Di Uno Stupendo Passato (Everything Begins Here)”, a ten-minute track on the single-sided third vinyl. However, the shamanic side is not missing either (“Through Leaden Clouds”) and slowly biting reverb journey “Surrounded” gets extra mention.

Along with Donato Dozzy, Claudio PRC, Dino Sabatini and others, Gigli belongs to the bunch of Italian techno producers who cut their teeth at the Elettronica Romana, a 2000s brethren of emerging artists from the Italian capital city. The debut album introduces a new chapter, expressing to some extent Gigli’s concert hall ambitions.