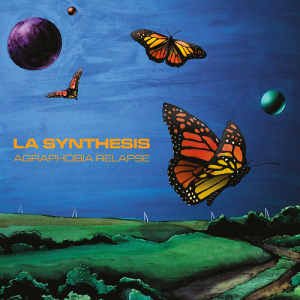 Initially a party organisation from Belgium, De:tuned has become a record label for reanimating the sounds from electronic music’s early days. Either new or unreleased material by artists like Mike Dred, Thomas P. Heckmann, Steve Stoll has seen the daylight on the label that completed the year 2014 with a whopping five-record box set “5 Years De:tuned“.

For the first time, the track “Agraphobia” was released in 1994 on Plink Plonk, a pioneering techno label co-founded by Mr. C (of Shamen). It was the breakthrough for LA Synthesis, a two-man project by Tony Gallagher and Carl Grant formed in London in 1992. While the term ‘agraphobia’ stands for complicated psychological disorder, encompassing abstract fears of abusive relationships, the actual track belongs firmly to techno’s dreamy side and gets now a deserved remastered reissue.

Butterfly-themed sleeve and label art by no one else than Abdul Haqq (Third Earth) introduces fragile yet driving original where spectacular synth riff is craving for extra attention. The theme of eloquent strings and warm pads resumes in scintillating versions by Plaid and Ian O’Brien before Terrace arrives with a stronger bass kick and abundant chords, bringing tears to the eyes with a divine synth attack at the mid-track. After ADJ’s classic IDM rework, Carl Finlow comes with a robust electro-esque “Transmogrify Remix” in caustic glaze. A timeless package bringing brightness to the life.