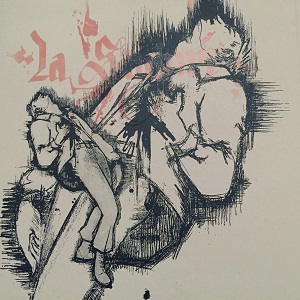 The A-side of “La Saignée” (“Bloodletting”) is exactly what we can expect from Metaphysik, one of Berlin’s danse macabre outlets, which is keen to explore the sounds of mental and physical decay.

The opener “Death Elemental” is written by Lee M. Bartow aka Theologian who launched back in 1997 an American noise project under the banner of Navicon Torture Technologies and during the last decade created an extensive catalogue for his own label Annihilvs. For Metaphysik, Theologian emits over 13 minutes of black ooze, which is initially carried by eerie drone and then crosses over to morbid modern classical in co-operation with Gretchen Heinel’s cello and Daniel Suffering’s synth.

The B-side belongs to Ancient Methods who has recently courted Berlin’s another darkside label aufnahme + wiedergabe and now takes Metaphysik to a previously unfamiliar area, to industrial dance. Pierced and scarred “A German Love” is a blazing narrative about meeting a German girl to experience pain and lust, being heavily exposed to Ancient Methods’s blueprint synth shocks. Guided by S/M-approved percussion, “Built On Scars” is even louder: the track gets off with crowd noise and chainsaw sequences, to preside over the floor and throw ordinary people to unordinary situations.