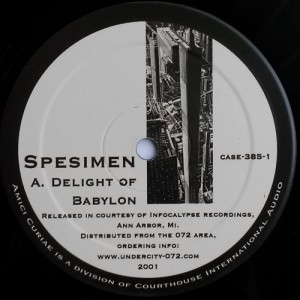 For a brief time in the 1990s, Ann Arbor electronic artist Andy Crosby aka Spesimen entered the electro scene with two releases on his own Infocalypse Records. His solo efforts included EPs on Amici Curiae and Pomelo, but before really taking off, Spesimen disappeared from the radars. Up to the comeback this spring, when Berlin label Libertine issued a split EP with Rusuden and Spesimen. Whether it was an one-off effort or does Crosby have something more in the pipeline, Terminal 313 tried to find out in a written interview with the artist living in San Francisco, going back to the roots of Spesimen as an artist.

What music did you listen to in your younger years?
I listened to all kinds of stuff. I grew up in Rochester, Michigan, a suburb about 20 minutes drive north of Detroit. My parents there always played classical and choral music around the house and also sometimes a lot of Irish music for some reason. When I was 5 or so I discovered headphones and listened to a lot of my parents’ ABBA 8-track tapes and for a while I was addicted to The Carpenters. I also played the heck out of a Meco Star Wars album I had in those days – I think it had a b-side of Star Trek or 2001 theme disco version on it …

Was it computer studies and Detroit’s proximity that brought you to the electro(nic) music?
Well, I always thought computers were cool ever since I can remember, and the idea of music made with synthesizer was amazing to me as a kid, it really sounded like the future. I think I got my first real taste of that from my cousin Chris who had some Human League and Kraftwerk vinyls that he introduced to me.

About the age of 8, I had on tape a mix from an Electrifying Mojo radio show that I must have played 10,000 times. I had been waiting diligently for a play of “Numbers” so I could try and tape it. Anyway it came on and ended up being a long mix of some “Numbers” 12″ version, then the “Tour de France” 12″ version and the album version of “Computer world”, I think around 15 minutes total on the tape. It was one of my first times being introduced to the idea of beat matching and stuff like that. At first I thought it was a really long song and only some time later when I got those albums I started to learn about the flow. Electrifying Mojo’s radio show was like a window to another world back then.

Also credit to Dennis Desantis (of Ableton fame and many fine music releases) who introduced me to Tangerine Dream when we were kids in 4th grade or so. My first concert was when his dad George took us to see Tangerine Dream in 1986. I always had a strong influence of that German school and I still think they were one of the best at using arpeggiation creatively.

I got more into industrial music in the high school, all the Wax Trax type of stuff. Meat Beat Manifesto was probably my favorite in that genre and I listened some hip hop like Public Enemy, etc. First started hearing real techno in 1989 or 1990 on the “Fast Forward” radio show by Alan Oldham. And then of course, in the next few years there were parties all the time with folks who are legends now.

The legends, you mean the Belleville Three?
I wasn’t old enough to drive until closer to the second wave and the parties we were going were a lot of Hawtin, UR, Claude Young, etc. In those days, D-Wynn was one of my favorites – he’s a master DJ.

Despite of having a few timeless electro releases in the 1990s, not much have been heard about Spesimen later, any particular reason for that?
It is flattering to describe those release as timeless, I appreciate the compliment, but I don’t think necessarily that’s what people thought of them at the time. Ultimately it was a very large amount of work for me, to end up basically breaking even on the costs. I knew that I could probably grow the label bigger if I had more capital but I didn’t, and needed to pay rent..

I ended up working for regular job in the videogames industry, which can be pretty bad about working a lot of extra hours. In 1998-2001 or so I was also working a lot on guitar music with my psyche-rock band Sublimation. We were pretty busy with that also, playing two or three shows a month and released two albums. In the end it just came down to what I had time to work on. That is still the trouble today as well, haha!

I have always continued writing electronic stuff but I have mainly done it for fun and relaxation and not so focused about it. I’m pretty bad about sitting down to really arrange and polish things, and I’m also kind of a perfectionist about it, so I will tweak songs to no end and eventually move to something else rather than really complete them. This is a bad habit I am working to change recently!

However you are working on new tracks, aren’t you?
For some reason there has been a bump in interest in my work lately, which has been a motivator, and with some more labels interested in releases, I’m trying to run with it while I can. Yeah, I’m working on some material lately: some is digging archives of very old stuff, some is new, some is trying to write in that older style.

Anything you are ready to disclose or shall we rather follow your Soundcloud account for the news?
There’s nothing official to announce yet but I will put the word out as soon as I know..

If the time is ripe for reanimating Infocalypse?
Hehe, you know, I have been thinking a little bit about the idea lately, but I do rather like letting other people deal with all the label stuff. I’m much more comfortable making beats than dealing with shipping and accounts receivable and whatnot. At this point, the main thing for me is getting tunes ready first, that are polished to a level I am satisfied with. And finding the time and creative energy to get them ready! And it would help if my neighbors would leave more often so I can mix with loud volumes, haha. And someday I will start a sister label called ‘infocalypso’ that is only the smoothest tropical island sounds.

Like every seven or so years, in 2016 there’s talk about electro revival. How do you see this?
I don’t think I’m close enough to the scene anymore, to really have a feel for what trend will come and go. I do think that trap (tunes like “Harlem shake”, that slow 808 boom in Jeremih’s tunes) really opened a new generation of people’s ears to the awesomeness of the booming 808 sound, and to beats that have more complexity, so it’s only natural that there would be another wave of variation built off of those sounds and styles.

Maybe it’s just that people get tired of the 4-on-the-floor after a while. I always find it more interesting to try to place notes on an electro beat, it is more challenging and opens a wider palette of rhythmic expression. It is strange though – I always consider myself as more of an electro artist but the labels I’m talking to lately want 4-on-the-floor tracks mainly. I guess people see different stuff they prefer within each release and, for example, the Libertine guys also wanted straight fours.. I like all styles, so whatever works, haha!

Any current labels or artists you would like to point out?
Well, I think Rusuden is cool. I didn’t know about him until we got teamed up for this new Libertine release and his “Volna” album from 2014 is fantastic. Dennis Desantis always impresses with his deep chord chops.

Lately I have enjoyed Jon Hopkins as there is a nice atmosphere to his sounds. I still listen a lot to these mp3s of a 10 track old school acid house album that Dykehouse made that I don’t know why never got released. He also put out this remix recently that is amazeballs, as well as it is probably my favorite electronic tune this year.

Also I have to give a shout about Chance McDermott aka Chancellor who makes some fine minimal old school style techno. His label is the reason why I got linked up with Libertine as they wanted to re-release that ancient tune. I met Chance because of the Kalamazoo scene, one of my housemates at the time was mad genius Fanon Flowers and I think they went to high school together or something like that.

The tune Spesimen speaks about is “Emergent Cy”, which appeared on Libertine and is ‘ancient’ because it was originally released in 1998 with “Premier Rhythmz”, a mini compilation on McDermott’s Premier Records.

Do you still have hardware from the old days or is it more computer-based production you prefer?
When I had to move to San Francisco for work I sold a lot of my old gear. My favorites were the Ensoniq eps-16 and Korg Mono/Poly … those were the workhorses on all those tunes from those Infocalypse EPs… I was sad to see them go, but it is a lot of stuff to transport across 2,000 miles. Nowadays I mess around with a Spectralis, I still use Yamaha RS7000 (my all time favorite hardware sequencer ), also an Elektron Octatrack and Machinedrum, but all that stuff doesn’t get used so much anymore. I really prefer the convenience of being able to save everything on the computer with one click.

I know some people prefer real circuits for their sounds, but I think the analog modeling stuff that we’ve got since CPUs started getting fast rivals any hardware gear nowadays. Korg makes a VST version of the Mono/Poly that sounds exactly like the real one (to make it sound like my old hardware one, I mix in some noise and randomize the pitch tuning a little bit…and pretend that some of the keys are sticky and don’t work LOL…).

But yeah, for now I am mainly using ACID Pro and Ableton depending on what I’m doing. I do think this is part of the reason I am slower to finish tracks, unfortunately. With hardware you are kind of forced to record the tune when it’s in progress.. In the computer I can tweak endlessly..

I also find that the process of going from a concept and a bunch of patterns into a full song to be somewhat tedious in Ableton, so some of my focus recently has been trying to solve how i can streamline that. I got a new controller recently with a bunch of faders and knobs that can be mapped in there and I’m hoping to get back to more of a ‘live’ approach to arranging since I think part of my problem is staring at piano rolls doesn’t inspire me so much. In the old days the mixes were performed live to the two tracks and I enjoy that rush as part of the process of making a good arrangement. Since I’m already tweaking sounds for eight hours every day for my job, for the music side it has to be fun and relaxing for me or I get lazy.

Andy, thank you so much for the interview!
Yeah, thanks for having me on your site Janno :).