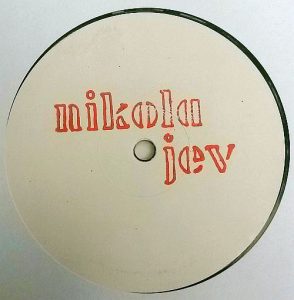 Nikolajev, Robert. Despite of young age, he has become a reputed DJ in the Estonian underground and co-runs Lekker, a vivacious nightspot in Tallinn. A special mention deserves the fact that he has been part of the techno act Neue Einsicht that warmed up Ancient Methods at Kõue Heli Festival in 2013.

After listening to Nikolajev’s debut on the Canadian imprint Collect Call, I’m not wondering why it became a Soundcloud success with about 12,000 plays, because not many new artists in 2016 can match Nikolajev’s premiere – and I’m not saying it because of being an Estonian.

The A-side contains two robust, bass-heavy cuts, beginning with “Pegasus” moaning under distortion until being ionized with stellar pads. Ghetto hydraulics arrive with “Neck Talk”, where chopping ‘work-this-MF’ drums are called to the duty and meeting vitriolic crescendos.

After old school flashback to Metalheadz era (96′ Jungle Mix of “Ties”), Nikolajev heads back to the future and the inspiration for quirky “Live Cut (Mutant Disco)” may derive from Rezzett, especially when the UK duo has done two memorable gigs in Tallinn. From another world compared to the A-side tracks is “Grace (Ruff Dub”), a shuffled, indie-smelling piece with a guitar sample that elegantly rounds up the release with plenty of variety.