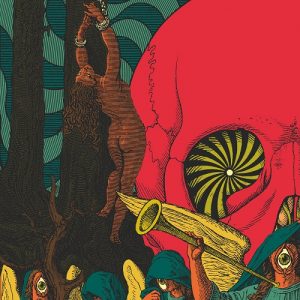 Acidbanger, yes it is. The opener of Dez Williams’s recent twelve that launched Killekill’s new Vanta Series is a 303-based onslaught with ripples of human voice and biting synth squeaks that promise floor domination. The next track “Hornet Tea” is equally caustic with tidal waves caused by drilling groove while “Offonone” is howling at the full moon in the condition of serious cerebral malfunction.

With this tight package Williams, who runs own Elektronik Religion label and maintains a studio in Holy Island, a piece of land off of the coast of North Wales, is showing his skills in doing rabid tracks but he is well capable to put out impressive electro tunes, like in his recent split EP with Carl Finlow on Bass Agenda.

The second twelve in Vanta’s four-record series “The End Is Near”, an industrial-minded EP bearing the title “End”, came from Kamikaze Space Programme. Like “The”, it comes with an inserted poster featuring surreal drawing by the French artist Elzo Durt.