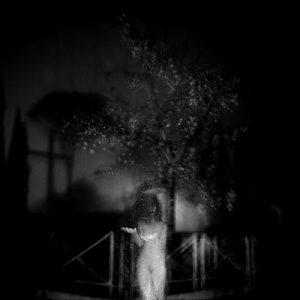 In recent years, Brokntoys has been a trusted platform for inspirational electro, often in its melodic form, and now the label expands the horizon with a techno-inclined offshoot called Eidetic. The sublabel’s first physically available release is the second by the catalogue numbers and comes from Russian producers Kovyazin D, who has previously been part of M>O>S and Chiwax roster, and Moralez, co-founder of the St Petersburg based label Mosaique and co-operator of a club of the same name.

The duo has succeeded in creating a stimulating four-tracker that is linked to Chicago-bred acid house and The Hague’s synth mania with a slant of disco. Especially the suspenseful title tune “The Night Watch”, with dramatic synth serpentines and giallo flair, has the qualities we know from Legowelt. Like a grubby version of the previous, “Black Moon” is cruising in a computer controlled mode over the Earth.

Well timed for the discovery of TRAPPIST-1 comes the frothing ambient acid opener “Another Planet (Intro)” and at the end, the duo is not willing to ignore Brokntoys’ foundations when the EP is climaxing with radiant no-prisoners electro “Sunken Space Sea”.

While the artistic influences can’t be overheard, the duo has managed to tackle familiar themes from a creative angle, giving a good start to Eidetic.