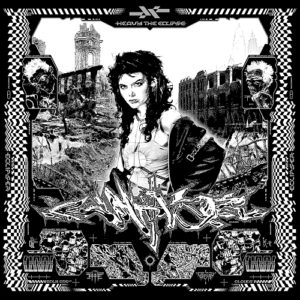 Hardcore takeover made in Rotterdam

If you fancy lethal bass drum, mentasm outbreaks, junglist stabs and even some happy hardcore riffs with kiddie samples – to go back and forth in time and shock the audience -, it all smells a lot like Rotterdam. In the nineties, the Dutch harbour town coined the term ‘gabber’ and became a hardcore haven with own subculture and hard-to-match tracks. This may have worked as a source of inspiration for the Scottish duo Clouds who decided to breathe Rotterdam’s creative air and to record their second album for Electric Deluxe in the city, in the studio of the label boss Speedy J.

They amassed influences from the UK and continental hardcore boom back in the days, which may lead respective scene veterans to seek out their worn-out rave shirts and salute “Heavy The Eclipse”, a chaotic and exalted album from Calum MacLeod and Liam Robertson, sounding in today’s environment as provocative as did gabber tracks way back.

The BPM counter is hitting easily 140 and higher when we are encountering an oppressed and encapsulated mini civilisation, which used to be Glasgow and 400 years later has turned into Neurealm. This is a disorganised trip in a bumpy and hazardous terrain and in terms of dance floor demolition, thematic anthem “Klaw Dealer, Unterverein 2522” hits the target with all vintage bits in place and a roughneck exclaiming ‘Rotterdam!’. As fierce are “DJ MCD ‘Heavens Tilt Into Darkness” and “Clubber’s Guide To Wreaking Havoc”, while “Dark Leviathan Krew” is a stadium rave king with perforated samples and rabid breaks.

Jungle elements show up in “Skulcoast” and “Strong Outside «» Onslaught Ash Krew”, while “Welcome To Lebanon Ark” is for brain-damaging headbanging the Thunderdome way. Any thoughts about silent night are gravely premature when the bodies are tested with “Parkzicht” – a 1990s party venue in Rotterdam had the same name – and “Nachtstorm Hardcore”, before experimental noise tracks are rounding up the album.

Fast and fidgety, even unacceptable by today’s club standards, this is a highly enjoyable ride. One extra point goes to the Neurealm theme, seen in the meticulous sleeve design of the triple pack. Conceived and developed in a close collaboration with the graphic designer David Rudnick, these expressive illustrations could work well in a graphic novel or even in a video game.