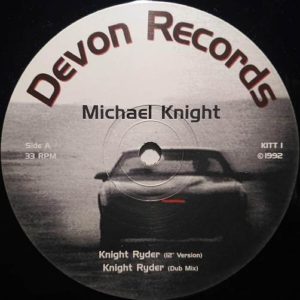 The first part of the 1998 in review can be found here.

Michael Knight – Knight Ryder (Devon Records)
A recent aftermarket purchase and unconscious realisation of a teenage dream, because Ed DMX’s electro release is a tribute to the Foundation’s heroes with whom many kids were growing up in the 1980s. Under the DMX Krew alias, in 1998 UK synth wizard Ed Upton published for Rephlex the synth-pop album “Nu Romantix” – coincidentally reissued in 2018 on Permanent Vacation – and reworked “Showroom Dummies” for Gigolo.

Miss Kittin And The Hacker – Frank Sinatra (International Deejay Gigolo Records)
‘Motherf*ckers are so nice, suck my d*ck, lick my a**’ was a summer tune from “Champagne! EP” that proclaimed the arrival of electroclash. DJ Hell’s Gigolo Records, with the help of Arnie Schwarzenegger in the early logotype, was largely focused on the cultivation of 1980s synth pop and wave influences, spreading all over the world.

Murat – Pilgrimage (Method 11:11)
One of the year’s underrated releases. I would call Murat “Canadian Jeff Mills” when he reproduced techno loops close to 4/4 stuff Downwards and Axis in his first and so far the only double pack. Murat’s inclusion is also related to his memorable three-deck DJ set I experienced in Toronto back in 1996. After a 2006 collab with The Advent, we didn’t hear new material from him for a long time, until the silence was broken this autumn.

Selway – Excession (Serotonin)
John Selway, one of Serotonin’s founders, dropped in 1998 four-tracker “Zoids Vol. 2” that continued the label’s streak of impressive electro tunes. Twenty years later, Serotonin is around again with new beats, as its early catalogue is well worth of (re)discovering.

Spesimen – Satellite (Infocalypse)
A mysterious producer from Michigan became a cult in the electro community whose pleas for rare Spesimen releases were answered in 2018 with a reissue of four tracks from his own Infocalypse imprint. Timeless expertly produced electro. For more about the artist, check Terminal 313’s interview with Spesimen.

The Other Side Of Space – Techno Drivers (Vocals) (Metroplex)
Erik Travis who started already in 1987 under the Sound of Mind alias, did a techno bass mission for Metroplex . In the same year, Aaron Carl’s “Down” came out on Juan Atkins’ label.

The Wee DJs – This Machine Is Broken (Penalty)
Penalty was Sativae’s short-lived sublabel that released five mini compilations that have well stood the test of time. Along with Edinburgh’s The Wee DJs, the first release featured Si Begg, Scarletron and Voigt Kampff.

Thomas-Fehlmann – 6ix Days (Apollo)
Already 20 years ago, a member of Palais Schaumburg and above all The Orb, belonged to seasoned electronic musicians and the Swiss-born ‘Wahlberliner’ is still very much in the business, releasing in 2018 a collab with Terrence Dixon and a solo album on Kompakt. The track “6ix Days” from his 1998 album on R&S sublabel was done with The Orb pal Alex Paterson.

Voice Stealer – Electromotive Force (Subvert)
An electro release I would take with me to a lonely island. The twelve came from a project of Carl A. Finlow (aka Silicon Scally) who has remained very prolific twenty years later.